Love and Lust
On the Psychoanalysis of Romantic and Sexual Emotions 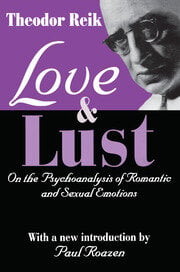 Love and Lust: On the Psychoanalysis of Romantic and Sexual Emotions

These selections from Theodor Reik's work concern the love life and sexual activity of men and women. Reik establishes the theme of this work in the following way: "The sex urge hunts for lustful pleasure; love is in search of joy and happiness." Over a third of this volume had never been published in book form before it originally appeared half a century ago. Its appearance in paperback, for the first time, is a welcome addition to current debates, liberated from ideological and political constraints.

The first part of the book is so far ahead of its time that it is still current. It reveals Reik's departure from Freud's theories and from those of most of his contemporaries in psychology and psychoanalysis. Part Two is a greatly abbreviated version of Masochism in Modern Man, retaining those parts with a direct bearing on the subject of this volume. Part Three offers two essays on why people remain single. In the author's usual direct style, they deal with the marriage shyness of the male and the psychological fears and resistance of both men and women to acceptance of the marriage bond. Part Four is Reik at his wisest. "The first lady whom I asked to read the manuscript said smilingly: 'Many of your impressions about us (women) are correct. No man should read the book!' A few seconds later, she said: 'Or rather, every man should read the book!'"

As Paul Roazen noted, "in contrast to some of Freud's other followers, Reik was prescient early on in distinguishing self-love from narcissism. Reik believed that genuine self-regard was the ultimate basis for developing the capacity to love."

At times Reik seems to defend women, at times to critique them. Yet he writes with sympathy and understanding. He challenges other authorities who have written on the subject, but he also agrees with many of them. Love and Lust is civilized writing at its most provocative. Reik is authoritative, and his book reflects the glow of a rich personality. It is mellow, but uncompromising.