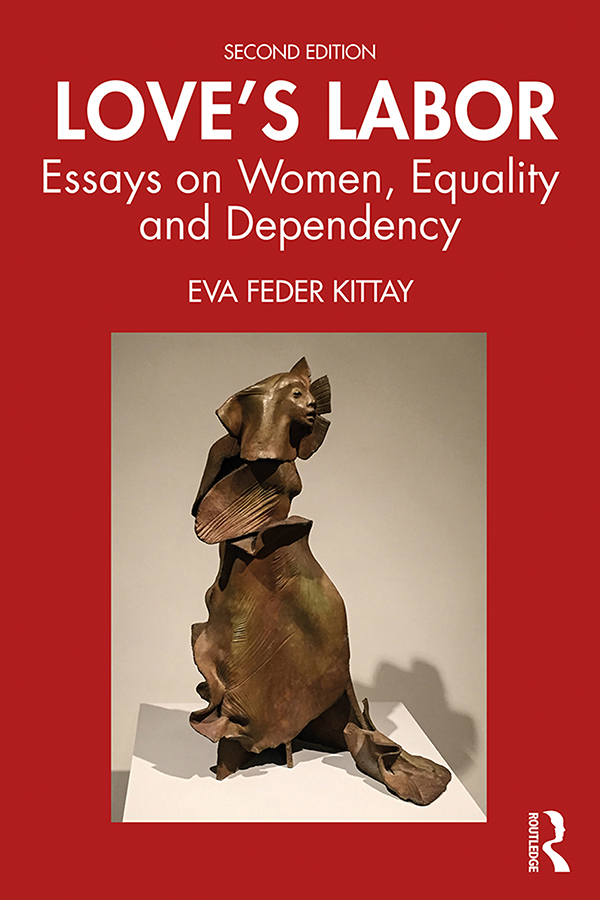 This new edition of Eva Feder Kittay’s feminist classic, Love’s Labor,explores how theories of justice and morality must be reconfigured when intersecting with care and dependency, and the failure of policy towards women who engage in care work. The work is hailed as a major contribution to the development of an ethics of care.

Where society is viewed as an association of equal and autonomous persons, the work of caring for dependents figures neither in political theory nor in social policy. While some women have made many gains, equality continues to elude many others, as in large measure, social institutions fail to take into account the dependency of childhood, illness, disability and frail old age and fail to adequately support those who care for dependents. Using a narrative of her experiences caring for her disabled daughter, Eva Feder Kittay discusses the relevance of her analysis of dependency to significant cognitive disability. She explores the significance of dependency work by analyzing John Rawls' influential liberal theory and two examples of public policy—welfare reform and family leave—to show how theory and policy fail women when they miss the centrality of dependency to issues of justice. This second edition has updated material on care workers, her adult disabled daughter and key changes in welfare reform.

Using a mix of personal reflection and political argument, this new edition of a classic text will continue to be an innovative and influential contribution to the debate on searching for greater equality and justice for women.

has spoken to audiences around the world and has had an impact on readers from many countries and in many disciplines: philosophy, sociology, disability studies, nursing. It has been required and supplementary reading on many undergraduate courses on Ethics, Feminist Ethics, Gender and Religious Ethics, Political Theory, Bioethics and Disability Studies. It has been translated into Italian, Japanese and Korean.

Finally, and not at all least, the book compels attention because of its moving and beautifully written account of Kittay's daughter Sesha. Kittay thus raises important questions about the role of the imagination of particulars in philosophy aimed at radical moral and social change.

– Martha Nussbaum, Ernst Freund Distinguished Service Professor of Law and Ethics at the University of Chicago

Twenty years ago Eva Kittay’s book Love’s Labor poignantly and persuasively argued that modern liberal states, and liberal philosophers, fail to recognize caregiving as essential human labor that sustains the species, and as work that deserves the protection of states, of rights, and of civil society. She then showed how liberal commitments can be reworked to center and protect that work. This edition further develops the argument in a global context, highlighting the often dire conditions of migrant and immigrant women who travel far from their own homes, separated from their kin, in order to care for first world children not their own. Kittay’s book underscores the humanity and universality of carework, and the need to construct a just world that respects the needs of caregivers and their dependents worldwide.

Few books touch and expand the moral imagination as deeply and humanely as Love’s Labor. Eva Feder Kittay carefully explores the grounds of interdependence and relationality in the human condition. She rejects facile notions of individualistic and competitive social being. She conjoins philosophy and feeling in the story of her personal confrontation with profound cognitive impairment in the life of her daughter, Sesha. This remarkable book of many methods opens for all of us new understandings of equality, social justice, and the practices of care.

was the first book to give sustained consideration to disability in the study of feminist care ethics. Arguing for the personhood of people with profound disabilities, it also made a compelling argument for why a just society must recognize the dignity and rights of care workers. In its unforgettable story of a mother’s love for her daughter it shows the power of a philosophy grounded in lived experience, feeling, and attachment. Groundbreaking in its time, Love’s Labor continues to be necessary reading for scholars working at the intersection of feminist theory, moral philosophy, and disability studies.

Introduction to the Second Edition

Chapter 1 Relationships of Dependency and Equality

Reflections on Being a Mother’s Child

Dependency in the Human Condition

A Paradigm of Dependency Work

Situating Dependency Work Within a Practice

Extending the Concept of Dependency Work

Chapter 2 Vulnerability and the Moral Nature of Dependency Relations

The Transparent Self of the Dependency Worker

Moral Obligations of Dependency Workers and an Ethics of Care

Moral Obligations to the Dependency Worker

Dependency as a Criterion of Adequacy

The Role of Equality and Equality’s Presuppositions

The Arguments in Outline

Chapter 3 The Presuppositions of Equality

Dependency as Both an Objective and a Subjective Circumstance of Justice

The Absence of Dependency in the "Circumstances of Justice"

Dependency and Heads of Households

The Idealization That "All Citizens Are Fully Cooperating Members of Society"

Free Persons Are a Self-Originating Sources of Valid Claims"

Is the Dependency Worker a Self-Originator of Claims?

Is the Dependency Worker a Self-Authenticator of Claims?

Chapter 4 The Benefits and Burdens of Social Cooperation

The Omission of Care as a Primary Good

The Public Conception of Social Cooperation

Dependents and Dependency Workers as the Least Well-Off

The Dependency Relation as a Social Position

A Third Principle of Justice?

"Welfare Is a Woman’s Issue": The Subtext of Welfare "Reform"

The Matemalist Justification of Welfare

The Principle of Doulia as a Justification for Welfare

The Family and Medical Leave Act

Welfare Re-Formed: A Vision of Welfare Based on Doulia

Chapter 6 "Not My Way, Sesha Your Way. Slowly." A Personal Narrative

A Child is Born

Portrait of Sesha at Twenty-Seven

She Came to Stay

Chapter 7 Maternal Thinking with a Difference

Care for Disability and Social Justice

Lessons for the Theoretician

Eva Feder Kittay is Distinguished Professor Emerita of Philosophy at Stony Brook University/SUNY. Her pioneering work interjecting questions of care and disability (especially cognitive disability) into philosophy, and her work in feminist theory and the philosophy of disability, have garnered a number of honors and prizes: 2003 Woman Philosopher of the Year by the Society for Women in Philosophy; the inaugural prize of the Institut de Mensch, Ethik und Wissenschaft; the Lebowitz prize from the American Philosophical Association; and Phi Beta Kappa, a Lifetime Achievement Award from the Center for Discovery, an NEH Fellowship and a Guggenheim Fellowship.

Eva Kittay’s first works in philosophy were in the philosophy of language, publishing Metaphor: Its Cognitive Force and Linguistic Structure (1987). Love’s Labor: Essays on Women, Equality and Dependency (1999) received international attention. The edited collection Women and Moral Theory (with Diana Meyers, 1987) ushered in decades-long work by philosophers in the ethics of care. Other edited collections include The Blackwell Guide to Feminist Philosophy (with Linda Alcoff, 2007) and The Subject of Care: Theoretical Perspectives on Dependency and Women (with Ellen Feder, 2003). A 2008 collection—based on a conference she organized, Cognitive Disability and the Challenge to Moral Philosophy—opened a new field of inquiry in philosophy. Her most recent book is Learning from My Daughter: The Value and Care of Disabled Minds (2019).