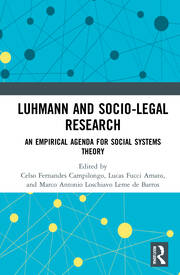 This book discusses the designs and applications of the social systems theory (built by Niklas Luhmann, 1927–1998) in relation to empirical socio-legal studies.

This is a sociological and legal theory known for its highly complex and abstract conceptual apparatus. But how to change its scale in order to study more localised phenomena, and to deal with empirical data, such as case law, statutes, constitutions and regulation? This is the concern of a wide variety of scholars from many regions engaged in this volume. It focuses on methodological discussions and empirical examples concerning the innovations and potentials that functional and systemic approaches can bring to the study of legal phenomena (institutions building, argumentation and dispute-settlement), in the interface with economy and regulation, and with politics and public policies. It also discuss connections and contrasts with other jurisprudential approaches – for instance, with critical theory, law and economics, and traditional empirical research in law. Two decades after Luhmann’s death, the 21st century has brought countless transformations in technologies and institutions. These changes, resulting in a hyper-connected, ultra-interactive world society bring operational and reflective challenges to the functional systems of law, politics and economy, to social movements and protests, and to major organisational systems, such as courts and enterprises, parliaments and public administration. Pursuing an empirical approach, this book details the variable forms by which systems construct their own structures and semantics and ‘irritate’ each other.

Engaging Luhmann’s theoretical apparatus with empirical research in law, this book will be of interest to students and researchers in the field of socio-legal studies, the sociology of law, legal history and jurisprudence.

Full Professor and Vice-Dean at the University of São Paulo Law School, Brazil.

Professor at the Department of Legal Philosophy and Jurisprudence at the University of São Paulo Law School, Brazil.