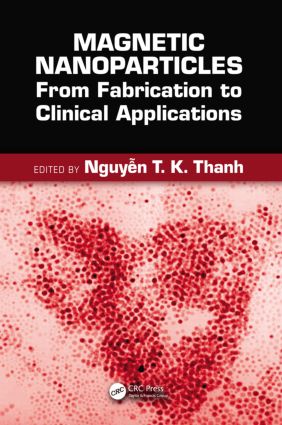 Offering the latest information in magnetic nanoparticle (MNP) research, Magnetic Nanoparticles: From Fabrication to Clinical Applications provides a comprehensive review, from synthesis, characterization, and biofunctionalization to clinical applications of MNPs, including the diagnosis and treatment of cancers.

This book, written by some of the most qualified experts in the field, not only fills a hole in the literature, but also bridges the gaps between all the different areas in this field.

Translational research on tailored magnetic nanoparticles for biomedical applications spans a variety of disciplines, and putting together the most significant advances into a practical format is a challenging task. Balancing clinical applications with the underlying theory and foundational science behind these new discoveries, Magnetic Nanoparticles: From Fabrication to Clinical Applications supplies a toolbox of solutions and ideas for scientists in the field and for young researchers interested in magnetic nanoparticles.

"Before reading this book, my expectations were high and editor Nguyen Thanh and her team of 65 (!) contributors did not disappoint. They wrote the new standard in the field of magnetic nanoparticles. … The chapters are as up-to-date as possible and written by true experts who have carefully reviewed the current state-of-the-art and provided the context, history, and uses of magnetic nanoparticles in each of the fields covered.

I personally think that every graduate student working on a magnetic nanoparticle-related project should read it cover to cover. … The book is also compulsory reading for any scientist who believes that magnetic nanoparticles might enhance their research or give them a better chance of getting grant funding. … In short, it was a pleasure to read and review this book, and I recommend it to anyone interested in the ever-expanding research field of magnetic nanoparticles."

Structure and Magnetism in Magnetic Nanoparticles

Fabrication and Characterisation of MNPs

Biofunctionalisation of MNPs for Biomedical Application

Strategies for Functionalisation of Magnetic Nanoparticles for Biological Targets

Removal of Blood-Borne Toxin in the Body Using Magnetic Nanospheres

Magnetic Nanoparticles for In Vitro Biological and Medical Applications: An Overview

Blood Cells as Carriers for Magnetically Targeted Delivery of Drugs

In 1992, she graduated and received the award for top academic achievement in Chemistry at Vietnam National University in Hanoi. She was then selected to study at the University of Amsterdam under a NUFFIC (the Netherlands organisation for international cooperation in higher education) program, under which she embarked on a career in research and obtaining her MSc in Chemistry. Two years later in 1994, she moved to London to undertake an EU-funded PhD in Biochemistry. She then undertook postdoctoral work in medicinal chemistry at Aston University, Birmingham, UK in 1999.

In 2001, she moved to the United States to take advantage of pioneering work in nanotechnology at Department of Chemistry and Advanced Material Research Institute at University of New Orleans. Two and a half years later in 2003, she joined the Liverpool Centre for Nanoscale Science, UK and it was not before long, she was awarded a prestigious Royal Society University Research Fellowship (2005-2014) and University of Liverpool lectureship. She was based at the Department of Chemistry, which was ranked the 7th in the UK in 2008 research assessment exercise (RAE), and School of Biological Sciences.

In January 2009, she was appointed a UCL-RI Readership (Associate Professor) in Nanotechnology and based at The Davy Faraday Research Laboratory, The Royal Institution of Great Britain, the oldest independent scientific research body in the world. There she leads a very dynamic research team focused on the design, synthesis and study of the physical properties of nanomaterials as well as their applications in biomedicine.

She has been an invited speaker at over 50 institutes and scientific meetings. Furthermore she was a Guest Editor of The Royal Society Philosophical Transactions A on "Nanoparticles" theme issue published in September 2010. She won a fierce competition to be the Lead Exhibitor for Royal Society Science Summer Exhibition (RSSE) on "Nanoscale Science: A giant leap for mankind" in London, July 2010 to celebrate the 350th anniversary of the Royal Society. New Scientist ranked the exhibition as one of the best of the RSSE.

Currently she is a member of Editorial Board of Advances in Natural Sciences: Nanoscience and Nanotechnology, also a committee member of Royal Society of Chemistry Colloid & Interface Science Group and Society of Chemical Industry Colloid & Surface Chemistry Group. She has been organising many conferences including a future prestigious RSC Faraday Discussion on "Functional Nanoparticles for Biomedical Applications" in 2014.