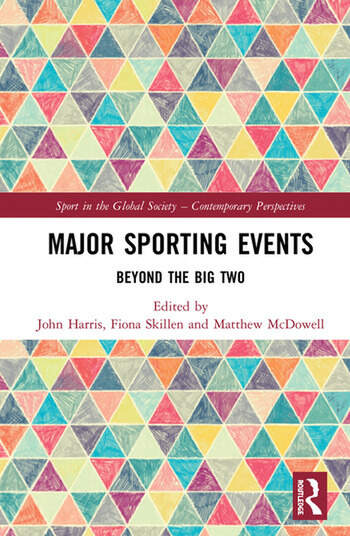 Sport has long been used as a tool for political gain and many major sporting events are now often framed as a panacea to help combat issues such as rising obesity rates, decreasing physical activity levels and wider urban decline. In reality though, fostering a temporary ‘feel-good factor’ is the most that many of these events can ever achieve even though a number are now sold on the popular rhetoric of legacy. Drawing upon a range of events and the work of international scholars from a variety of disciplinary backgrounds, this collection offers insights into the ways in which events outside of the big two are (re)positioned as part of the wider sporting landscape. The chapters originally published as a special issue in Sport in Society.

John Harris is Associate Dean Research in the Glasgow School for Business and Society at Glasgow Caledonian University, UK. His publications include Rugby Union and Globalization and Sport, Events, Tourism and Regeneration (Routledge, co-edited with Nicholas Wise).

Fiona Skillen is a lecturer in Sport and Events Management at Glasgow Caledonian University, UK. Her research focuses on the historical development of women's sport in Britain. Her ground breaking work emphasises a new way of looking at women's sporting past and her publications include Women, Sport and Modernity in Interwar Britain (Peter Lang). She has also worked on media representations of sportswomen, advertising, sports clothing and the public and medical debates surrounding women's increased participation in physical activities.

Matthew L. McDowell is a lecturer in sport policy, management, and international development at the University of Edinburgh, UK, and a member of the Edinburgh Critical Studies in Sport (ECSS) research group. His research includes work on the history of sporting events, the history of football, the history of surfing, Scottish sport and Empire, sport on the Atlantic Rim, and island/coastal sport.