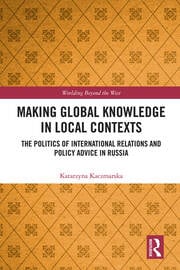 Making Global Knowledge in Local Contexts: The Politics of International Relations and Policy Advice in Russia

This book draws on extensive ethnographic research undertaken in Russia to show how the wider sociopolitical context – the political system, relationship between the state and academia as well as the contours of the public debate – shapes knowledge about international politics and influences scholars’ engagement with the policy world.

Combining an in-depth study of the International Relations discipline in Russia with a robust methodological framework, the book demonstrates that context not only bears on epistemic and disciplinary practices but also conditions scholars’ engagement with the wider public and policymakers. This original study lends robust sociological foundations to the debate about knowledge in International Relations and the social sciences more broadly. In particular, the book questions contemporary thinking about the relationship between knowledge and politics by situating the university within, rather than abstracting it from the political setting. The monograph benefits from a comprehensive engagement with Russian-language literature in the Sociology of Knowledge and critical reading of International Relations scholarship published in Russia.

This text will be of interest to scholars and students in International Relations, Russian and Post-Soviet Studies, the Sociology of Knowledge, Science and Technology Studies and Higher Education Studies. It will appeal to those researching the knowledge-policy nexus and knowledge production practices.

1. The elephant in the room: the sociopolitical context of IR knowledge-making

5. The uses of knowledge

"How do we 'know' what we know about international politics? What social, political and institutional forces structure imaginations of the international – of policy practitioners or indeed of academics? This important book – the first detailed analysis of the politics of knowledge about the international in Russia – contributes to the important new literature in the social sciences and International Relations on the politics of knowledge production. Much is at stake: not only our understandings of Russian responses in international politics but also what imaginations of the international more generally 'do' for analysts, states or other interests. Also, crucially, questions of academic freedom and lack thereof, often ignored, are raised to our attention. This study will be an important reference point – and a point of provocation – for all analysts of Russia, International Relations and the Sociology of Knowledge." — Milja Kurki, Aberystwyth University, UK

"If we take seriously the notion that scholarly knowledge is produced in a *local* context, then we have to produce careful studies of how exactly that context shapes the kinds of claims that scholars make and the ways that they evaluate the validity of those claims. Kaczmarska’s remarkable book illuminates the conditions under which Soviet, and then Russian, scholars worked, and leads to an expanded appreciation of how social science works in a non-democratic environment." — Patrick Thaddeus Jackson, American University, USA

"The book is a very detailed and comprehensive analysis of the impact of political and institutional context on knowledge production using IR in Russia as a case study. I greatly appreciate the combination of familiarity with the voluminous literature, in-depth engagement with the complex realm of the Russian academia and evidence gathered from fieldwork and interviews. The book should be welcomed by scholars of Russian Studies and Science and Technology Studies." — Vladimir Gel’man, Aleksanteri Institute, University of Helsinki, Finland

"This book is a must for everybody engaging in building an international community in the social science and humanities and in a policy-relevant dialogue across reemerged East-West divide. Katarzyna Kaczmarska demonstrates the contexts in which International Relations and other social sciences in Russia function and their striking difference with a "default" perception of social research as exiting in the West. She gives the floor to a wide variety of voices from Russian academia that demonstrate various approaches and common problems. The book is not only an important addition to the volume of the social studies of IR, but it also brings its readers closer to understanding the limits and pressures experienced by Russian scholars and thus facilitates academic cooperation in this non-academic age."— Ivan Kurilla, Department of Political Sciences, European University at St. Petersburg, Russia