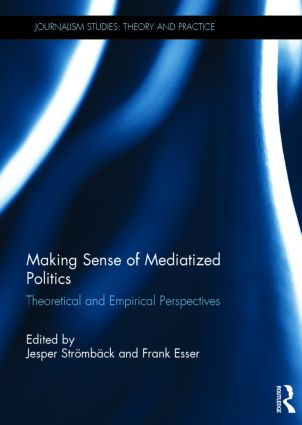 Over time and across Western democracies, the media has become increasingly influential, and a great deal more political processes have become altered, shaped or structured by the media and the perceived need of individuals, organizations and social systems to communicate with or through the media. The key theoretical perspective to understand this process is mediatization. As a long-term process which has increased the importance of the media and their spill-over effects on political processes, institutions, organizations and actors, mediatization is one of the most important processes reshaping politics and transforming democracies across the Western world.

This book was originally published as a special issue of Journalism Studies.

1. Making Sense of the Mediatization of Politics

3. Mass Media Logic and the Mediatization of Politics: A Theoretical Framework

4. Mediatization and Political Leadership: Perspectives of the Finnish Newspapers and Party Leaders

5. Opposing the Government but Governing the Audience? Exploring the Differential Mediatization of Parliamentary Actors in Switzerland

6. The Mediatization of Political Accountability: Politics, the News Media Logic and Industrial Crises in the 1980s and 2000s

7. News Coverage of Politics and Conflict Levels: A Cross-National Study of Journalists’ and Politicians’ Perspections of Two Elements of Mediatization

8. Phases of Mediatization: Empirical Evidence from Austrian Election Campaigns Since 1970

10. Metacoverage and Mediatization in US Presidential Elections: A Theoretical Model and Qualitative Case Study

11. Mediatization, Legal Logic and the Coverage of Israeli Politicians on Trial

13. Passive Accomplice or Active Disruptor: The Role of Audiences in the Mediatization of Politics

Jesper Strömbäck is Professor in Political Communication and Ludvig Nordström Professor and Chair in Journalism at Mid-Sweden University, Sundsvall, Sweden, where he is also research director at the research institute DEMICOM. His books include Handbook of Election News Coverage Around the World (Routledge, 2008) and Political Public Relations (Routledge, 2011).

is Professor of International & Comparative Media Research at the University of Zurich, Switzerland. He is co-director of the National Research Centre on the Challenges to Democracy in the 21st Century (NCCR Democracy). His research focuses on cross-national studies of news journalism and political communication. His books include Comparing Political Communication (2004), Handbook of Comparative Communication Research (2012), and Democracy in the Age of Globalization and Mediatization (2013).

The journal Journalism Studies was established at the turn of the new millennium by Bob Franklin. It was launched in the context of a burgeoning interest in the scholarly study of journalism and an expansive global community of journalism scholars and researchers. The ambition was to provide a forum for the critical discussion and study of journalism as a subject of intellectual inquiry but also an arena of professional practice. Previously, the study of journalism in the UK and much of Europe was a fairly marginal branch of the larger disciplines of media, communication and cultural studies; only a handful of Universities offered degree programmes in the subject. Journalism Studies has flourished and succeeded in providing the intended public space for discussion of research on key issues within the field, to the point where in 2007 a sister journal, Journalism Practice, was launched to enable an enhanced focus on practice-based issues, as well as foregrounding studies of journalism education, training and professional concerns. Both journals are among the leading ranked journals within the field and publish six issues annually, in electronic and print formats. From the outset, the publication of themed issues has been a commitment for both journals. Their purpose is first, to focus on highly significant or neglected areas of the field; second, to facilitate discussion and analysis of important and topical policy issues; and third, to offer readers an especially high quality and closely focused set of essays, analyses and discussions; or all three.

The Journalism Studies: Theory and Practice book series draws on a wide range of these themed issues from both journals and thereby extends the critical and public forum provided by them. The Editor of the journals works closely with guest editors to ensure that the books achieve relevance for readers and the highest standards of research rigour and academic excellence. The series makes a significant contribution to the field of journalism studies by inviting distinguished scholars, academics and journalism practitioners to discuss and debate the central concerns within the field. It also reaches a wider readership of scholars, students and practitioners across the social sciences, humanities and communication arts, encouraging them to engage critically with, but also to interrogate, the specialist scholarly studies of journalism which this series provides.