Management of International Institutions and NGOs
Frameworks, practices and challenges 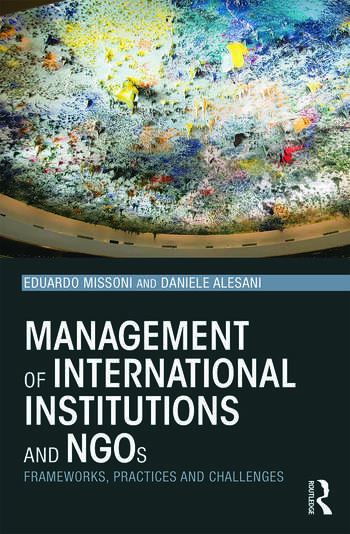 Management of International Institutions and NGOs: Frameworks, practices and challenges

International Institutions (IIs), International NGOs (INGOs) and Transnational Hybrid Organizations (THOs) play a hugely important role in the modern world economy. Despite having been studied by scholars from a range of disciplines, these organizations have never before been approached from a management perspective. This ambitious book analyzes the management challenges associated with international cooperation and sheds light on how these organizations have evolved as the political, economic and business environments have changed around them.

Covering an admirably broad canvas, the authors pursue two main objectives. Firstly, they explore the main management frameworks developed in the context of the corporate and national public/non-profit organizations and adapt them to the specificity of IIs and INGOs. This leads to the identification of a "tailored" approach to IO management based on their institutional and operational settings, stakeholder groups, core business, staff profile, and financial arrangements. Secondly, they "bring theory into practice" by linking frameworks to several case studies and best practices of organizations currently experimenting with management systems and tools, with case studies including the World Bank and the Gates Foundation.

This comprehensive textbook is a must-own resource for students and academics involved with studying and working with international organizations.

This work is divided into four main sections.

The purpose of this section is to create a basic understanding and knowledge of the institutional and operational characteristics of the group of organizations under investigation (collectively called International Organizations, IOs).

, describes the broader context in which IOs operate, we discuss the complex architecture of the international development cooperation sector, and the evolving dynamics among its main actors. The authors first explore the notion of "development" and its evolution. They then delve into the challenges related to program coordination in the international development and humanitarian aid sectors. They also analyze the evolving roles of IIs and INGOs in light of the emerging paradigms for program implementation and describe the evolution of IIs' funding mechanisms.

explores the current management reforms in IOs. The main objective of this section is to elaborate how managerial frameworks can be successfully applied to IOs and to showcase management tools and systems through actual practices and case studies. In this Section, the authors respond to questions such as:

Section 4 of this work explores how IIs and INGOs can build and manage their institutional profile. The authors first tackle the interrelated subjects of communications, external relations, and resources mobilization. They then approach the concept of "ethics" for organizations that, for their very nature, should promote sustainability and ethical values, but are often accused of a lack of transparency and accountability.
...
View More
View Less

Dr. Daniele Alesani holds an MBA from the University of Geneva, Switzerland and a Ph.D. in Public Administration from Parma University; in his professional and academic career he has extensively worked on the main issues related to managerial and administrative reforms, accounting change and adoption of full accrual accounting systems in International Organizations. His background includes accounting policy analysis, training, re-engineering of management control and information systems, implementation and support of financial systems and project management.

In 2004, Dr. Alesani joined the SDA Bocconi School of Business in Milan as lecturer and researcher. In 2006, Daniele joined the Business School of the University of Geneva as lecturer and MBA Programme Director, developing targeted management courses for United Nations System organizations.

Dr. Alesani is author of several international publications in the area of managerial and administrative reforms in the public sector and intergovernmental organizations, among which "Factors affecting UN accountability: between managerial reforms and social claims"(In Bauer M., Knill C. (eds.) Management Reforms in International Organisations (2008), Baden-Baden, NOMOS), ‘IPSAS adoption by the World Food Programme: an application of the contingency model to intergovernmental organizations’ (International Journal of Public Sector Performance Management 2011 (1), Special Issue on IPSAS) and ‘Getting Heath reforms Right: What Lessons from an Italian Case’ (Health Services Management Research, vol. 7 (29) (2009)).

Professor Eduardo Missoni is Doctor in Medicine and Surgery, with a postgraduate Specialization in Tropical Medicine (Rome La Sapienza University), and holds an MSc from the London School of Hygiene and Tropical Medcine.

Since 2002 he is an adjunct professor at the Bocconi University in Milan, Italy, and at SDA Bocconi School of Management. His teachings, research and coordination activities extend over two main areas, Management of International Institutions and non profits, and Global Health and Development. He is also Bocconi Univeristy Rector’s delegate for Development Cooperation issues. Since 2001, he also holds a Global Health course at the Faculty of Sociology of the Bicocca University in Milan. He was a visiting professor for "Ethics and International Organizations" at the Geneva International Organizations MBA, and currently collaborates with the Geneva School of Diplomacy, the Institute for International Political Studies (ISPI) in Milano, and is frequently invited to lecture in several other academic and training Institutions.

Professor Missoni started his medical career in 1980 with a three years long experience as a medical volunteer in Nicaragua. He was later a UNICEF officer in Mexico, in charge for Primary Health Care programmes at national and State level. He later became an Adviser to the Directorate General for Development Cooperation of the Italian Ministry of Foreign Affairs, where he served for over 15 years. In this capacity, he was in charge of health and social development programmes in Latin America and the Caribbean, and Sub-Saharan African countries. During the same period he acted as the liaison officer with the World health Organization (WHO) and the Panamerican Health Organization (PAHO), and represented his country in other international meetings and groupings, including the G8 health experts group, which he chaired in 2001.

Professor Missoni has a strong civic and social commitment and contributed to found, develop and manage several  local, national and international non-profit and philanthropic organizations. Between 2004 and 2007, he was the Secretary General of the World Organization of the Scout Movement (WOSM).

Professor Missoni has extensively published, mainly in the field of International Development Cooperation and Global Health.

A welcome one-stop shop to unveil the complex organizational variations generated in the last decades among IIs and NGOs and their impact in addressing the ultimate goal of a more peaceful, just and sustainable world for all.

Highly recommended reading for students, scholars and policymakers interested in International Organizations and NGOs as organizations. The authors show the importance of understanding and addressing organizational and managerial dilemmas, using detailed cases and examples'

Eduardo Missoni and Daniele Alesani have provided the nascent field of management of international institutions and NGOs with its first comprehensive text. It effectively links theory and research with practice, making it invaluable for students and for those faced with the complex challenges of managing in an international environment.

This book offers a solid foundation for understanding what makes managing international institutions uniquely complex. I recommend it to anybody interested in providing leadership and contribution to the challenges of international cooperation.

This is a very useful handbook to guide and understand the management and action of international organizations and NGOs. It combines theoretical and practical considerations that should be of service both to practitioners and scholars.

An invaluable piece of work, provided by Eduardo Missoni and Daniele Alesani. An effective, comprehensive and practical guide on the complex challenges of managing international organizations / NGOs. A blended conceptual and operational framework for scholars and practitioners engaged in the humanitarian, developmental and specialized work of institutions whose ultimate goal is to serve the global public