Managing and Interpreting D-Day's Sites of Memory
Guardians of remembrance 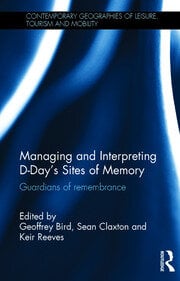 Managing and Interpreting D-Day's Sites of Memory: Guardians of remembrance

More than seventy years following the D-Day Landings of 6 June 1944, Normandy's war heritage continues to intrigue visitors and researchers. Receiving well over two million visitors a year, the Normandy landscape of war is among the most visited cultural sites in France. This book explores the significant role that heritage and tourism play in the present day with regard to educating the public as well as commemorating those who fought.

The book examines the perspectives, experiences and insights of those who work in the field of war heritage in the region of Normandy where the D-Day landings and the Battle of Normandy occurred. In this volume practitioner authors represent a range of interrelated roles and responsibilities. These perspectives include national and regional governments and coordinating agencies involved in policy, planning and implementation; war cemetery commissions; managers who oversee particular museums and sites; and individual battlefield tour guides whose vocation is to research and interpret sites of memory.

Often interviewed as key informants for scholarly articles, the day-to-day observations, experiences and management decisions of these guardians of remembrance provide valuable insight into a range of issues and approaches that inform the meaning of tourism, remembrance and war heritage as well as implications for the management of war sites elsewhere. Complementing the Normandy practitioner offerings, more scholarly investigations provide an opportunity to compare and debate what is happening in the management and interpretation at other World War II related sites of war memory, such as at Pearl Harbor, Okinawa and Portsmouth, UK.

This innovative volume will be of interest to those interested in remembrance tourism, war heritage, dark tourism, battlefield tourism, commemoration, D-Day and World War II.

1. Introduction: Guardians of memory, war heritage and the relationship to remembrance  2. Rebuilding from scrap: The efforts of the D-Day Commemoration Committee  3. Competence, courage, and sacrifice: Telling the story at Normandy American Cemetery and Memorial  4. The Commonwealth War Graves Commission: the Normandy experience  5. The German War Cemetery at La Cambe  6. The wheels of history; the Juno Beach Centre as a conveyer belt.  7. The Utah Beach Museum: An evolution in commemoration  8. Pegasus Memorial Museum: Heritage of the British Airborne  9. From pilgrimage to tourism: The evolution of battlefield tourism  10. Preserving the memory of D-Day and the battle of Normandy through the German lens  11. The relevance of myth in the D-Day tour narrative  12. Towards an informed memory: the work of the Canadian Battlefields Foundation in Normandy  13. Saving D-Day: Changing perceptions of Overlord  14. The Mémorial de Caen: A museum for peace  15. Two medics and rows of pews: The church at Angoville au Plain as a site of memory  16. We remember D-Day: the D-Day Museum in Portsmouth, UK  17. Conclusion

Geoffrey Bird is an Associate Professor and Graduate Program Chair in the School of Tourism and Hospitality Management at Royal Roads University, Victoria, Canada, since 2008. Geoffrey has over 25 years in tourism. His experience includes government policy and planning, and leading community tourism projects in Malaysia and Vietnam. He has been a visiting professor for Munich University of Applied Sciences and visiting researcher at Monash University. He completed his PhD in 2011 at the University of Brighton where he explored the relationship between tourism, remembrance and landscapes of war in Normandy. Geoff also served as an officer in the Royal Canadian Naval Reserve and as a heritage interpreter at the Canadian National Memorial at Vimy Ridge, France.

Sean Claxton has worked as a battlefield tour guide in Normandy since March 2004. Growing up in Norfolk, England, a lifelong interest in history led to 11 years working at the Cabinet War Rooms, the underground headquarters of Winston Churchill, that is under the care of the Imperial War Museum. Many visits to Normandy as a tourist were followed by a move there, initially working for two of the most successful and renowned tour operators in the region. Since the spring of 2014 he has worked as an independent guide. In addition to guiding, he has been involved in numerous commemorative projects, assisted several authors with research and is a frequent visitor to other European battlefields.