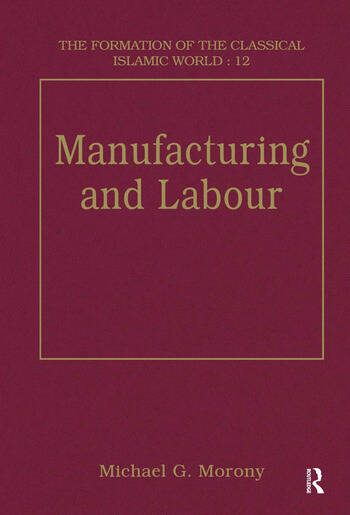 This volume, together with its companion volume Production and the Exploitation of Resources, examines the economic basis of the early Islamic world, looking at the organization of extractive and agricultural operations, manufacturing processes, and labour relations. This volume opens with studies of artisanal production that address the issues of specialization, the division of labour, and the proliferation of manufacturing occupations in early Islamic times, looking in particular at ceramic and textile production. The section on labour expands the enquiry to cover the legal and social status of manual labourers and questions of the organization and mobility of labour, wage labour, and labour partnerships. These studies deal with both the manufacturing and agricultural sectors, and also identify the role of slave labour in commerce, domestic service, agriculture and herding. Taken together, this body of work demonstrates a high degree of commercialization in the early Islamic economy, particularly in Iraq, Egypt and Ifriqiya.

Contents: Introduction; Manufacturing: The development of techniques in the medieval Muslim world, G. Wiet, V. Elisséeff and Ph. Wolff; The main industries of the Mediterranean area as reflected in the records of the Cairo Geniza, S. D. Goitein; An introduction to the study of Muslim ceramics, Jean Sauvaget; A new interpretation of the economic history of medieval Egypt: the role of the textile industry, 254-567/868-1171, Gladys Frantz-Murphy; Labour: The crafts among the Arabs, Ignaz Goldziher; Base trades in Islam, Robert Brunschvig; The economic conditions of the Mawali in early Islamic times, Jamal Judah; Craftsmen and groups of craftsmen in the first centuries of Islam, Barbara Finster; The working people of the Mediterranean area during the high Middle Ages, S. D. Goitein; Agricultural and irrigation labourers in social and economic life of Iraq during the Umayyad and Abbasid caliphates, Muhammad Abdul Jabbar; The ’serfs’ of Islamic society under the Abbasid regime, Muhammad Abdul Jabbar Beg; Law and economy in Ifriqiya (Tunisia) in the 3rd Islamic century: agriculture and the role of slaves in the country’s economy, Mohamed Talbi; Labour partnerships in early Islamic law, Abraham L. Udovitch; Index.