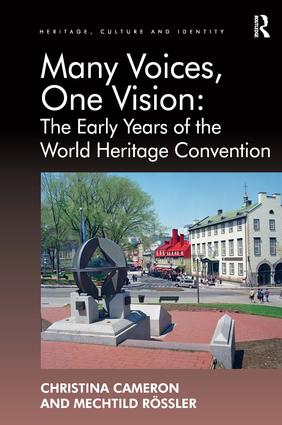 Many Voices, One Vision: The Early Years of the World Heritage Convention

In 1972, UNESCO put in place the World Heritage Convention, a highly successful international treaty that influences heritage activity in virtually every country in the world. Focusing on the Convention's creation and early implementation, this book examines the World Heritage system and its global impact through diverse prisms, including its normative frameworks, constituent bodies, programme activities, personalities and key issues. The authors concentrate on the period between 1972 and 2000 because implementation of the World Heritage Convention during these years sets the stage for future activity and provides a foil for understanding the subsequent evolution in the decade that follows. This innovative book project seeks out the voices of the pioneers - some 40 key players who participated in the creation and early implementation of the Convention - and combines these insightful interviews with original research drawn from a broad range of both published and archival sources. The World Heritage Convention has been significantly influenced by 40 years of history. Although the text of the Convention remains unchanged, the way it has been implemented reflects global trends as well as evolving perceptions of the nature of heritage itself and approaches to conservation. Some are sounding the alarm, claiming that the system is imploding under its own weight. Others believe that the Convention is being compromised by geopolitical considerations and rivalries. This book stimulates reflection on the meaning of the Convention in the twenty-first century.

"This collection is an extension of such works and can be viewed as a series of illustrative case studies that will engage with and inform students, early-career researchers, geographers and historians alike about the possibilities of think-ing geographically about the multitudinous ways of making, circulating and displaying global knowledge in the nineteenth century. In its focus on books, pictures, pamphlets and models as objects involved in the circulation of scientiﬁc knowledge, this volume also offers a counterpoint to the burgeoning literature on the mobility of scientiﬁc instruments".

"[T]his group of authors give readers a variety of tools with which to think through precisely what ‘global’ can mean in historical analysis. The variety of methodologies expertly employed is refreshing and makes the collection a useful primer for students but also an, instructive resource for experts in any of the ﬁelds included. It is a self-aware collection determined to provoke questions and un-dermine assumptions about how knowledge is formed across boundaries, a goal it achieves admirably."

1. Creation of the World Heritage Convention