Mao, Stalin and the Korean War
Trilateral Communist Relations in the 1950s 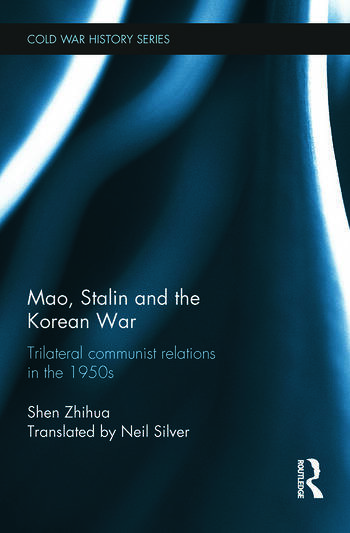 Mao, Stalin and the Korean War: Trilateral Communist Relations in the 1950s

This book examines relations between China and the Soviet Union during the 1950s, and provides an insight into Chinese thinking about the Korean War.

This volume is based on a translation of Shen Zihua’s best-selling Chinese-language book, which broke the mainland Chinese taboo on publishing non-heroic accounts of the Korean War.The author combined information detailed in Soviet-era diplomatic documents (released after the collapse of the Soviet Union) with Chinese memoirs, official document collections and scholarly monographs, in order to present a non-ideological, realpolitik account of the relations, motivations and actions among three Communist actors: Stalin, Mao Zedong and Kim Il-sung.

This new translation represents a revisionist perspective on trilateral Communist alliance relations during the Korean War, shedding new light on the origins of the Sino-Soviet split and the rather distant relations between China and North Korea. It features a critical introduction to Shen's work and the text is based on original archival research not found in earlier books in English.

This book will be of much interest to students of Communist China, Stalinist Russia, the Korean War, Cold War Studies and International History in general.

Translator and Editor Neil Silver is a retired U.S. diplomat who worked in, on and around China. He served in embassies in Beijing, Tokyo, and Moscow, including as Minister-Counselor for Political Affairs in Beijing and Tokyo, and, in the State Department, worked on Chinese, Japanese, Korean, and Southeast Asian affairs.

"A translation of a study published a decade ago in Chinese, provides a useful reminder of the continuing utility of old fashioned approaches, as well as their limitations… Through a meticulous reconstruction of the available evidence on what Soviet, Chinese, and North Korean diplomats and decision-makers said to each other, Chinese scholar Shen Zhihua provides a vivid account of the origins and course of the Korean War from the Communist side, especially the period before the commencement of armistice negotiations in July 1951." - Dr. William W. Stueck, Department of History , The University of Georgia, U.S.A., in e-International Relations, 2012

"Shen Zhihua is one of China’s foremost Cold War historians, [known for his] unusually dispassionate and archive-based treatment of a politically sensitive episode in China’s modern history, its so-called 'War to Resist America and Assist Korea.' Now, thanks to translator Neil Silver, a retired US diplomat, Shen’s illuminating writings on the Korean War are accessible to readers in English. Drawing on Soviet archives, Shen reconstructs the mind of Joseph Stalin as he plotted a course that put "Greater Russia’s" national security interests first, but did so in the language of Communist internationalism and solidarity. Even more fascinating is Shen’s attempt to explain Mao Zedong’s attitude toward Stalin and strategic thinking behind joining the North Koreans in their fight against the US. Explaining Beijing, Shen is on even surer footing, and thinner ice, due to his combing of Chinese diplomatic sources. Shen’s boldest thesis is that Stalin gave Kim Il Sung a green light to invade South Korea out of frustration that the Soviet Union had to give up control of an ice-free Pacific port in the Sino-Soviet Treaty of 1950 — in other words, that the Korean War was indirectly caused by Communist China’s ability to negotiate with the Soviets as equals! Stalin expected the Chinese to back up the North Koreans if the US sent troops — exactly as ended up happening."

"On the surface, to be sure, this is a book about the Korean War. Yet, deep down, it is a challenge, or a farewell, to an official, revolutionary historical narrative that has been dominant in the People’s Republic China (PRC) for decades.... Shen’s narrative underscores the agency and choices of Beijing, and this realization, in turn, enables today’s [Chinese] readers to question the dominant narrative, and to find historical roots for a non-Communist China that has been emerging since the 1990s. In this sense, this book can be read not just as a historical inquiry, but also as a contemporary expression of an intellectual struggle to reframe history in order to make sense of China’s changing society, today. Perhaps, this explains why the book has attracted a large readership in China, selling approximately 100,000 legal and illegal copies since the publication of the Chinese version. This book, then, is not just for historians of the Korean War and Sino-Soviet relations in the 1950s, but for contemporary China-watchers observing and analyzing today’s China." Masuda Hajimu, National University of Singapore, in the "Journal of American-East Asian Relations" 19 (2012) 3-4.

"The publication of Shen Zhihua’s Mao, Stalin and the Korean War marks a significant advance in English-language literature on the Korean War.... [Shen] provides a much fuller picture of Beijing’s decision to intervene than scholars have previously been able to construct.... Neil Silver’s highly readable translation ... includes a useful introductory essay by Yang Kuisong of Beijing University, who takes issue with some of Shen’s conclusions regarding Stalin’s motives for starting the war. With regard to China’s decision to intervene, however, Yang concludes that Shen’s account is "convincing, logical, dramatic, and on target". Indeed, this path-breaking book is both fascinating and essential reading for all scholars interested in the recent history of Northeast Asia." - Kathryn Weathersby, H-Diplo, H-Net Reviews, April 2013

“[Shen Zhihua’s] analysis of the making of the Sino-Soviet alliance – and the author is one of the world’s foremost authorities on the subject – is insightful and quite detailed.... [T]his is one of the analytically strongest and most-well researched books on the ... Korean War.... [The translator’s] valuable contribution to the internationalization of such outstanding scholarship will certainly win appreciation [among] historians of China’s foreign relations and the global Cold War.” - Sergey Radchenko, University of Nottingham Ningbo China, in H-Diplo Roundtable, June 2013

"There are several fine studies of the Sino-Soviet relationship during the Korean War, but none comes close to Shen Zhihua’s densely textured knowledge of the Mao Zedong-Stalin interactions. Shen has been at the forefront of Cold War studies in China, where he founded the Center for Cold War Studies at the East China Normal University in Shanghai in 2000. Through his painstaking and indefatigable efforts, he has pushed the frontier of our knowledge of China’s role in the Korean War further than anybody else. Now, thanks to Neil Silver’s excellent translation, Shen’s seminal work on the Korean War has been made available to non-Chinese-speaking readers." - Qiang Zhai, Professor of History at Auburn University in Montgomery, China Review International, vol. 19, no. 2 (2012)