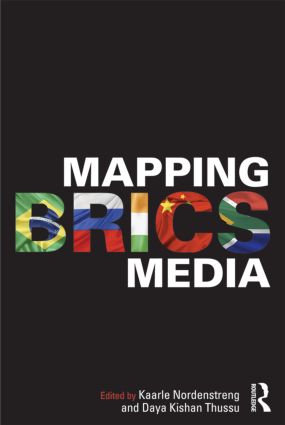 Mapping BRICS Media is the first comprehensive and comparative study of the emerging media landscape in the world’s most dynamic and fastest growing markets. This pioneering collection focuses on one of the key topics in contemporary international relations - the emergence of BRICS (Brazil, Russia, India, China and South Africa) - a grouping that includes some of the world’s largest populations and fastest growing economies.

Accessible and comprehensive, the book provides a critical guide to the complex debates about the impact of the ‘rise of the rest’ on the media globe and how far this poses a challenge to the Western-dominated world order and its media systems.

"This groundbreaking anthology has managed to delineate what is to date the most comprehensive and crystal clear topography of the oft-neglected media and culture in the BRICS nations, to unmask their contextual lacunae, and to uncover the latent (im)possibilities for this emergent geo-political alliance in terms of reinventing the new order of global communication."

"The BRICS countries are the new actors in the global economy that fundamentally challenge the existing world order and its power relations. Part of that world order are today’s media systems and they are confronted with rapidly emerging and growing new cultural powers. This timely and comprehensive study is a key contribution to the exploration and understanding of crucial shifts in the global communication landscape."

Cees Hamelink, Professor Emeritus of International Communication at the University of Amsterdam, the Netherlands

"During the era of digital capitalism, the destiny of the global South remains both open-ended and fateful: Will the rapidly growing communications systems of Brazil, Russia, India, China and South Africa embark on strategies of alternative development, aiming to counter the catastrophic policies of the present, U.S.-centric world order; or, will they abandon their own rich histories of struggle for social justice, hoping merely to adapt and profit from the existing institutions of global exploitation? A profound intervention, Nordenstreng and Thussu's collection helps us toward an answer."

Kaarle Nordenstreng is Professor Emeritus of Journalism and Mass Communication at the University of Tampere, Finland. Author or editor of over 30 books (mainly in Finnish and English), most recently Communication Theories in a Multicultural World (coedited with Clifford Christians, 2014).

is Professor of International Communication at the University of Westminster in London. Author or editor of 16 books, most recently Communicating India’s Soft Power: Buddha to Bollywood (2013), he is the Managing Editor of the journal Global Media and Communication.