Mapping Transatlantic Security Relations
The EU, Canada and the War on Terror 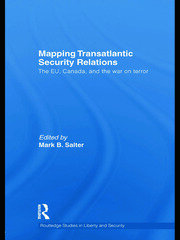 Mapping Transatlantic Security Relations: The EU, Canada and the War on Terror

This book examines how legal, political, and rights discourses, security policies and practices migrate and translate across the North Atlantic.

The complex relationship between liberty and security has been fundamentally recast and contested in liberal democracies since the start of the 'global war on terror'. In addition to recognizing new agencies, political pressures, and new sensitivities to difference, it is important that not to over-state the novelty of the post-9/11 era: the war on terror simply made possible the intensification, expansion, or strengthening of policies already in existence, or simply enabled the shutting down of debate. Working from a common theoretical frame, if different disciplines, these chapters present policy-oriented analyses of the actual practices of security, policing, and law in the European Union and Canada. They focus on questions of risk and exception, state sovereignty and governance, liberty and rights, law and transparency, policing and security. In particular, the essays are concerned with charting how policies, practices, and ideas migrate between Canada, the EU and its member states.

By taking ‘field’ approach to the study of security practices, the volume is not constrained by national case study or the solipsistic debates within subfields and bridges legal, political, and sociological analysis. It will be of much interest to students of critical security studies, sociology, law, global governance and IR in general.

Mark B. Salter is Associate Professor at the School of Political Studies, University of Ottawa.

Introduction Mark B. Salter  1. Special Delivery: The Multilateral Politics of Extraordinary Rendition Maria Koblanck  2. Miscarriages of Justice and Exceptional Procedures in the "War Against Terrorism" Emmanuel-Pierre Guittet  3. Risk-Focused Security Politics and Human Rights: The Impossible Symbiosis Anastasia Tsoukala  4. The North Atlantic Field of Aviation Security Mark B. Salter  5. Tracing Terrorists: The EU-Canada Agreement in PNR Matters Peter Hobbing  6. The Global Governance of Data Privacy Regulation: European Leadership and the Ratcheting Up of Canadian Rules Abraham Newman  7. Made in the USA? The impact of transatlantic norms on the European Union’s Data Protection Regime Patryk Pawlak  8. Norm and Expertise in the Global Fight Against Transnational Organized Crime and Terrorism Amandine Scherrer  9. The Accountability Gap: Human Rights and EU External Cooperation on Criminal Justice, Counterterrorism and the Rule of Law Susie Alegre  10. The Role of NGOs in the Access to Public Information: Extraordinary Renditions and the Absence of Transparency Marton Sulyok and Andras Pap  11. Replacing and Displacing the Law: The Europeanization of Judicial Power Antione Mégie  12. Transjudicial Conversations about Security and Human Rights Audrey Macklin  13. A Coordinated Judicial Response to Counterterrorism? Counterexamples Rayner Thwaites  14. The Other Transatlantic: Practices, Policies, Fields Mark B. Salter and Can E.Mutlu

Mark B. Salter is Associate Professor at the School of Political Studies, University of Ottawa.