Mariette and the Science of the Connoisseur in Eighteenth-Century Europe 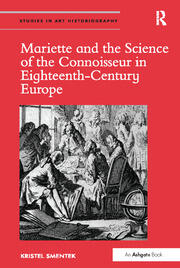 Mariette and the Science of the Connoisseur in Eighteenth-Century Europe

Celebrated connoisseur, drawings collector, print dealer, book publisher and authority on the art of antiquity, Pierre-Jean Mariette (1694-1774) was a pivotal figure in the eighteenth-century European art world. Focusing on the trajectory of Mariette’s career, this book examines the material practices and social networks through which connoisseurs forged the idea of art as an object of empirical and historical analysis. Drawing on significant unpublished archival material as well as on histories of science, publishing, collecting and display, this book shows how Mariette and his colleagues’ practices of classification and interpretation of the graphic arts gave rise to new conceptions of artistic authorship and to a history of art that transcended the biographies of individual artists. To follow Mariette’s career through the eighteenth century is to see that art was consolidated as a specialized category of intellectual inquiry-and that style emerged as its structuring analytic device-in the overlapping spaces of the collector’s cabinet, the connoisseur’s portfolio and the dealer’s shop.

Contents: Introduction: Art history and the 18th-century connoisseur; Knowledge economies of the print trade; The making of a drawings connoisseur; The collector’s cut; Origins: of antiquarianism, aesthetics, and history; Conclusion: The Mariette sales; Select bibliography; Index.

'This historically grounded and conceptually nuanced account of Pierre-Jean Mariette’s career and activities gives us a much needed insight into the eighteenth-century practices of art dealership, connoisseurship and collecting, illuminating their key role in the formation of the modern notions of style, authorship, authenticity and the oeuvre. Smentek’s elegantly argued study will be important not only to the scholars and students of eighteenth-century art but also to those who are interested in the Enlightenment origins of art history as a discipline.' - Ewa Lajer-Burcharth, Harvard University, USA

'This is a fascinating account of the early history of connoisseurship in France in which the role of the print collector, Pierre-Jean Mariette, and his drawings were without equal. Kristel Smentek’s wonderfully rich and detailed analysis brings Mariette’s professional and private activities of collecting to life by reconstructing the social networks of trade, erudition and politeness that determined and sustained them. Here, connoisseurship emerges not as a dry and arcane epistemological practice, but as a set of intellectual and physical performances by which works of art were attributed and authenticated and also displayed and enjoyed. Mariette and the Science of the Connoisseur in Eighteenth-Century Europe is an outstanding contribution to the field.' - Katie Scott, The Courtauld Institute of Art, UK

'This book is a mine of interesting information that moves seamlessly from the economics of the 18th century print and publishing trade to the development of connoisseurship and individual attribution in the 18th century. All the issues are intelligently handled and discussed.' - Art Newspaper

'Smentek’s study offers a multitude of new material on Mariette and thoughtfully situates him within a larger context of connoisseurship, artistic associations, European-wide networks of expertise, and early calls for a shift from the contemporary (rococo) style. The book is well written and elegantly produced, with twenty color plates (many illustrating Mariette’s distinctive--and, from a modern standpoint, controversial – mounts for his drawings). Scholars and students of the art world of eighteenth-century France will find it a most welcome contribution.' - H-France Review

'Smentek’s book brilliantly demonstrates how an in-depth and fully contextualised study can add to our understanding of a seemingly familiar subject. Her results are enlightening and often surprising. Pierre-Jean Mariette emerges as a truly international figure firmly rooted in his period. Her study is a seminal addition both to eighteenth-century studies and to the history of art-historical methodology.' - The Burlington Magazine

'In this important book, Smentek follows the trajectory of Pierre-Jean Mariette, the emblematic figure of the connoisseur in Enlightenment Europe and heir to a great dynasty of print publishers and print dealers. She thus revisits the geneaology of a discipline, the history of art. What is a connoisseur? What is connoisseurship? Behind these words, that appeared in France and England in the eighteenth century, Smentek shows how new forms of knowledge were articulated around works of art.... and new categories were promoted that would come to play an foundational role in the discipline of art history... Solid, well-argued and elegant, Smentek’s book is a major contribution to the history of art and the cultural history of Enlightenment.' - French Studies

'Smentek has written a remarkable book, that should have a profound effect on our understanding of one of the most celebrated connoisseurs of eighteenth-century France. I was struck by how enlightened Smentek’s own thinking was, and how deep her understanding of Mariette’s own manière is. As with the connoisseurs she writes about, she analyses the physical evidence (manuscripts, albums, drawings, printed texts) rather than the personality of Mariette, which leads to a new and more nuanced understanding of the science of this particular connoisseur, and his peers.' Journal of the History of Collections