Maritime Societies of the Viking and Medieval World 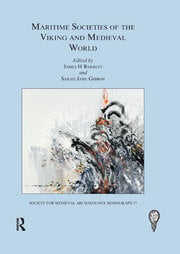 Maritime Societies of the Viking and Medieval World

This book is a study of communities that drew their identity and livelihood from their relationships with water during a pivotal time in the creation of the social, economic and political landscapes of northern Europe. It focuses on the Baltic, North and Irish Seas in the Viking Age (ad 1050–1200), with a few later examples (such as the Scottish Lordship of the Isles) included to help illuminate less well-documented earlier centuries. Individual chapters introduce maritime worlds ranging from the Isle of Man to Gotland — while also touching on the relationships between estate centres, towns, landing places and the sea in the more terrestrially oriented societies that surrounded northern Europe’s main spheres of maritime interaction. It is predominately an archaeological project, but draws no arbitrary lines between the fields of historical archaeology, history and literature. The volume explores the complex relationships between long-range interconnections and distinctive regional identities that are characteristic of maritime societies, seeking to understand communities that were brought into being by their relationships with the sea and who set waves in motion that altered distant shores.

Chapter 1: Maritime Societies and the Transformation of the Viking Age and the Medieval World

Chapter 2: Sails and the Cognitive Roles of Viking Age Ships

Chapter 3: Trade and Trust in the Baltic Sea Area During the Viking Age

Chapter 5: Between East and West: Economy and Society on the Island of Gotland

Chapter 6: Viking Age Bornholm: An Island on the Crossways

Chapter 9: Dorestad as a Fluviatile Society

Chapter 10: Maritime Environment and Social Identities in Medieval Coastal Flanders: The Management of Water and Environment and its Consequences for the Local Community and Landscape

Chapter 16: Status and Identity in Norse Settlements: A Cast Study from Orkney

Chapter 17: The Viking Occupation of the Hebrides: Evidence from the Excavations at Bornais, South Uist

Chapter 21: The Threatening Wave: Norse Poetry and the Scottish Islands

Chapter 22: Sea Kings, Kingdoms and the Tides of Change: Man and the Isles and Medieval European Change, AD c.1100-1265

Chapter 23: The Sea Power of the Western Isles of Scotland in the Late Medieval Period

"The volume is well-presented and sufficiently illustrated with some full color images. The many maps and tables are clear to use and internally consistent. With good production values, the volume is well edited and includes several go-to papers for the subject, mostly for the serious student of the subject and for scholars with university classes in mind. This fine volume is indeed a welcome addition to the scholarship of this exciting era."

- Colleen Batey, University of Glasgow, Scotland in The Journal of Island and Coastal Archaeology, 2016