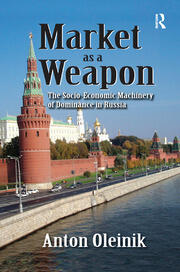 Market as a Weapon: The Socio-economic Machinery of Dominance in Russia

Power is all-encompassing in Russia, and mediates most interactions among people, including everyday decisions. Even the recent administrative reforms in the country, which began at the end of the 1990s, have tried to reshape the government institutions and modernize the country through the use of power. Changes were initiated and implemented by people vested with power.

Power, convention, and trust can all support coordination. However, in the Russian institutional context power tends not only to supplement the alternative coordination mechanisms but also to substitute them. Power can be used to solve problems related to social action by merging two (or several) centers of decision-making into one. The actor vested with power decides exactly how coordination and adjustment can be achieved. This path-breaking volume shows how power turns into a unique coordination mechanism and what are consequences of such transformation for everyday life and businesses.

Market as a Weapon focuses on issues of power and domination using the configuration of power relationships in Russia as a "critical case," but goes far beyond a narrowly defined scope of country-specific studies. Particular emphasis is put on domination by virtue of a constellation interests in the market, since this is a relatively underexplored yet broadly used technique for imposing will in all countries that heavily rely on interventionist policies. Instead of being a liberating force, the market becomes an additional instrument facilitating the continuous reproduction of power, which explains the title of the book.

Both qualitative and quantitative data, including more than one hundred in-depth interviews with experts, state servants, and businesspeople in Russia, as well as statistics, are used throughout the text of this major book.