Markets and the Arts of Attachment 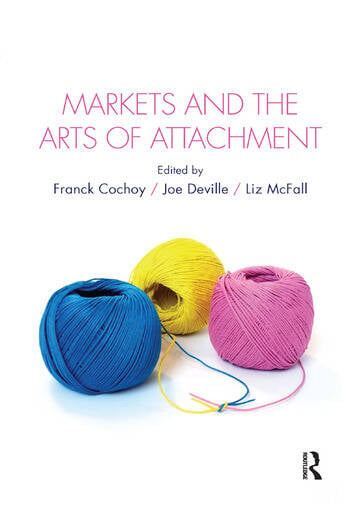 Markets and the Arts of Attachment

The collection explores how sentiment and relations are organised in consumer markets. Social studies of economies and markets have much more to offer than simply adding some ‘context’, ‘culture’ or ‘soul’ to the analysis of economic practices. As this collection showcases, studying markets socially reveals how attachments between people and products are engineered and can explain how, and why, they fail. The contributors explore the tools and techniques used to work with sentiment, aesthetics and relationships through strategies including social media marketing, consumer research, algorithmic profiling, personal selling, and call centre and relationship management. The arts of attachment, as the various contributions demonstrate, play a crucial but often misunderstood role in the technical and organisational functioning of markets.

Franck Cochoy is Professor of Sociology at the University of Toulouse Jean Jaurès and a member of CERTOP-CNRS, France. He works in the field of economic sociology, with a focus on the human and technical mediations that frame the relationship between supply and demand. He has conducted several projects and case studies on such topics as the role of marketing, packaging, self-service, trade press, and so on. He recently published The Limits of Performativity: Politics of the Modern Economy with Liz McFall and Martin Giraudeau (eds.) (Routledge, 2014), On the Origins of Self-Service (Routledge, 2015) and On Curiosity, the Art of Market Seduction (Mattering Press, 2016).

Joe Deville is a Lecturer at Lancaster University, based jointly in the Departments of Organisation, Work & Technology and Sociology. A major focus of his work has been the encounter between defaulting consumer credit debtor and debt collector, which was the subject of his first book Lived Economies of Default, published by Routledge in 2015. Other areas of interest include disaster preparedness, comparative and digital methods, behavioural economics, and theories of money. He is an editor at Journal of Cultural Economy and a co-founder and editor of Mattering Press, an Open Access book publisher, and the online consumer studies research network Charisma.

Liz McFall is Senior Lecturer in Sociology and research lead for Digital Participation at the Open University in the UK. She is currently researching how the convergences surrounding digital disruption and the current global wave of health care reforms are forging new roles for states, insurance markets and marketing. She is author of Devising Consumption: Cultural economies of insurance, credit and spending (Routledge, 2014), Advertising: A cultural economy (2004) and Editor-in-Chief of the Journal of Cultural Econ