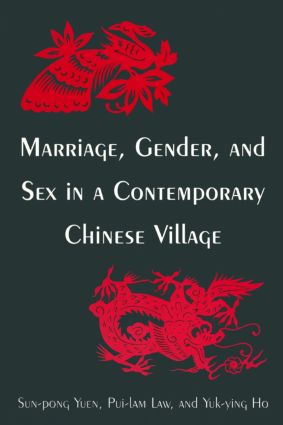 Marriage, Gender and Sex in a Contemporary Chinese Village

This book explores changing concepts of marriage and gender relationships and attitudes toward sex in a rural Chinese community over the past five decades. The book is based on a study of an industrialized peasant village in Guangdong Province from 1994 to 1996 and subsequent visits from 2000 to 2002. According to the authors, the rural economic reforms of the 1980s in southern China have challenged and reinforced the deep structure of Chinese familism and this has lead to tensions between tradition and modernity. The first section of the book explores how attitudes toward marriage and courtship have changed over the past fifty years through personal accounts of three different marriages from different generations. In Part II, the transition from a traditional to a modern society is discussed from the perspective of several women from different generations. The third section focuses on sexual relationships and the growing sex trade in the village. Part IV includes updates to the original survey and takes a look at village politics.

1. Theoretical Framework: Familism, Women's Liberation, and Autonomy; 2. Baixiao Village: Past and Present; Part I. Finding a Partner, Love, and Marriage 3. Marriage, Familism, and Autonomy; 4. The Story of Uncle Qiu: The Dictates of the Parents, the Words of the Matchmaker; 5. The Story of Zhichao: The Transition from Tradition to Modernity; 6. The Story of Qiming: A Marriage in the 1990s; Part II. Tradition, Women, and the Interpretation of the Self 7. A Review of the Research into Women in Chinese Villages; 8. Wang Guizhen: Growing up Under the Reform and Opening-up Policy; 9. "A Female's Need for Fulfillment" in the Eyes of Traditional Women; Part III. Sex and Sex Trade Under the Reform and Opening-up Policy 10. Familial Culture, Gender Relationship, and Sexual Indulgence; 11. Sex, Sex Trade, and Extra-marital Relationship in the Eyes of Men; 12. Wealth, Materialism, and the Feminine Viewpoint; 13. The Paradox of the Development in Baixiao Village; 14. Reflections on Methodology; Part IV. Revisit: Baixiao Village at the Turn of the Century 15. Baixiao Village at the Beginning of the Twenty-first Century; 16. Rural Political Reform: Baixiao Village Committee Election