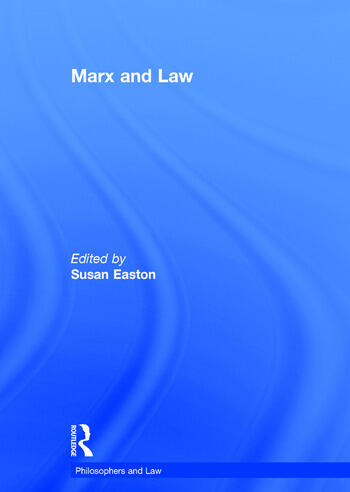 This collection of classic articles affirms Marx's continuing relevance to modern debates on the role of law. The issues addressed include the implications of Marx's analysis of law for understanding the form and functions of law, justice and injustice, the critique of liberal legalism, the ideological nature of law, international human rights law, crime and punishment. The legacy of Marx's work is reassessed in the context of recent historical changes.

Contents: Series preface; Introduction: Marx's legacy; Part I Principal Themes in Marx's Analysis of Law: The metaphysics of law: an essay on the very young Marx, Donald R. Kelly; Marxist perspectives in the sociology of law, Steven Spitzer; Marx and law, Andrew Vincent. Part II Marx's Work and Key Concepts in Legal Theory: The Form and Functions of Law: Selected extracts from The Institutions of Private Law and Their Social Functions, Karl Renner; Commodity form and legal form: an essay on the 'relative autonomy' of law, Isaac D. Balbus. Ideology: The ideology of law: advances and problems in recent applications of the concept of ideology to the analysis of law, Alan Hunt; On recent Marxist theories of law and the state and juridico-political ideology, Bob Jessop. Justice: The concept of justice in Marx, Engels, and others, William Leon McBride; Facts, values and Marxism, Susan M. Easton; Marx and justice, James Daly. Rights: The problem with Marx on rights, Stephen A. Brown; Retrieving Marx for the human rights project, Brad R. Roth. Crime and Punishment: Marx and Engels on law, crime and morality, Paul Q. Hirst; Correspondence: radical deviancy theory and Marxism. A reply to Taylor and Walton, Paul Q. Hirst; Toward a political economy of crime, William J. Chambliss; Marxism and retribution, Jeffrie G. Murphy. International Law: Marxism and international law: a contemporary analysis, B.S. Chimni; The commodity-form theory of international law: an introduction, China Miéville. Part III Socialist Reconstruction: The general theory of law and Marxism, Evgeny B. Pashukanis; Commodity and the subject, Evgeny B. Pashukanis; The 'withering away' of law, Christine Sypnowich. Part IV Marx and Law: Future Directions: Marxism after Communism, Michael Burawoy; Marxism and the continuing irrelevance of normative theory, Brian Leiter; Index.

Susan Easton is Reader in Law at Brunel University School of Law, UK.

'...a worthwhile purchase for any library supporting faculty research in either Marx or law'. Philosophy in Review