Marxism-Leninism and the Theory of International Relations 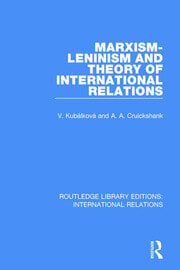 Marxism-Leninism and the Theory of International Relations

Refuting the assumption that orthodox Marxist theory contains anything of relevance on international relations, this book, originally published in 1980, clarifies, reconstructs, and summarizes the theories of international relations of Marx and Engels, Lenin, Stalin and the Soviet leadership of the 1970s. These are subjected to a comparative analysis and their relative integrity is examined both against one another and against selected Western theories. Marxist-Leninist models of international relations are fully explored, enabling the reader to appreciate the essence and evolution of fundamental Soviet concepts as such as proletarian, socialist internationalism, peaceful co-existence, national liberation movement and détente.