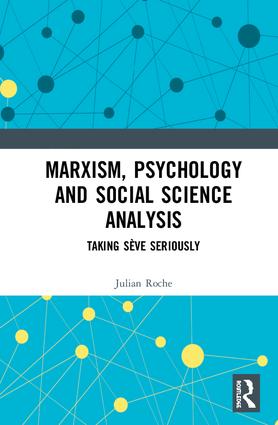 Marxism, Psychology and Social Science Analysis applies Marxist theory, psychology, and the work of Lucien Sève to specific research in the social sciences. It shows in practical terms what guidance can be offered for social scientific researchers wanting to incorporate Sève’s view of personality into their work. Providing case studies drawn from different social sciences that give the book significant breadth of scope, Roche reviews the impact of "Taking Sève Seriously" across the study of international relations theory, economics, law, and moral philosophy.

The book begins by placing the work of Lucien Sève in context and considers the development of psychology in relation to Marxism, before going on to summarise the work of Sève in relation to the psychology of personality. It considers the opportunities for refreshed research in social relations based on developments by Sève, before examining Marxist biography and the implications of Sève’s views. The book also includes chapters on the social discount rate, on constructivism in international relations, on the concept of promising in moral philosophy and the Marxist conception of individual responsibility. It addresses not only how research should be carried out differently, but whether utilising the theoretical framework of other writers, even non-Marxists, can deliver a similar outcome.

With its use of five distinct case studies to analyse the work of Lucien Sève, this unique book will be of great interest to academics, researchers and postgraduate students in the fields of psychology, philosophy and social sciences.

"Julian Roche presents an ambitious discourse on Seve’s Marxist theory of personality and its distinctive contribution to psychology and research in the social sciences. Roche considers the applicability of Marxist biography and a particular strength is the construction of case studies, drawn from Economics, Literature, Philosophy and International Political Economy, that are compelling in their breadth of debate and analysis. Roche’s contemporary correspondence with Seve offers rare and valuable insights into the latter’s thinking around the practical application of his approach. Seve’s clarion call for the emancipation and full development of each individual, provides a positive and uplifting perspective for visionless times. This is an excellent contribution to the field, of interest both to seasoned academics and to those social science researchers not yet conversant with Seve’s view of personality."

"This is an important book on the work of French Marxist Lucien Sève, who in a long academic career argues for the importance of individuals and their psychology to social processes, while also placing human activity in concrete social and historical relations. Here, Julian Roche provides the best introduction to Sève’s thought, showing why we should take this seriously in the development of both Marxism and psychology. He then goes on to demonstrate how this would change theory and research in various fields of study in social science and philosophy. With growing interest in Sève’s work in the English-speaking world, this is a timely and wide-ranging book drawing on sources that are not as yet translated."

Chapter One: The Problem

Chapter Three: Lucien Sève and the theory of personality

Chapter Eight: How Should a Marxist Biography Look?