Marxist Perspectives on South Korea in the Global Economy 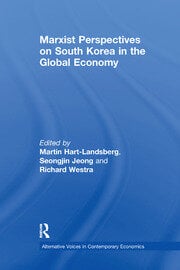 Marxist Perspectives on South Korea in the Global Economy

This volume brings together work by international scholars to provide a unique analysis of the past, present and possible future trajectory of Korea's political economy from a distinctly Marxist perspective. The volume differentiates the Marxian approach to the political economy of Korean development from the Keynesian, social democratic approach that currently dominates the critical literature. In doing so the volume provides a unique view of the development of the South Korean Economy.

'The state centered approach to East Asian development made possible a decisive advance over neoclassical dogma in interpreting Korea’s high-speed growth, but could not itself cope with Korea’s great crisis and the enormous changes it detonated. This volume shows how Marxist theoretical perspectives on profitability, capital accumulation, and class struggle can enable a more all-encompassing historical account of Korea’s transformations, especially by analyzing government policy and economic institutions in terms of political conflict, the nature of workers’ resistance, and Korea’s changing place in the global economy.' Robert Brenner, UCLA, USA '...a critical examination of South Korea's past growth, recent crisis and contemporary resructuring, struggles and challenges.' Journal of Economic Literature '...I greatly appreciated the insightful readings of Korean capitalism and recommend this volume to anyone who is interested in the debate on the Asian developmental state.' Economic Geography