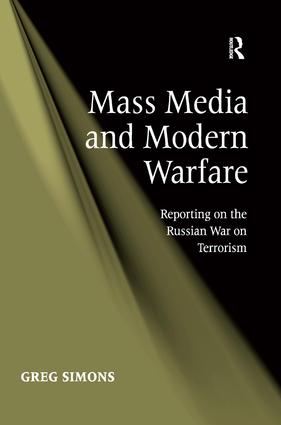 Reporting on the Russian War on Terrorism, 1st Edition

Mass media are essential to democratic society; in contrast, the War on Terror has been interpreted as an assault on democracy and freedom by Islamic fundamentalists. The building and maintenance of public support is essential in modern warfare due to the increasing politicization of warfare, where losses and gains are measured in political rather than military terms. And if progress cannot be demonstrated during a war, then by default one is assumed to be losing. Greg Simons tackles the complicated yet essential role of mass media in society. Taking the Global War on Terror as a prime example, the author adopts a multidisciplinary approach to analyze the various facets of war and the role of the media within it. Assessing in particular the Russian fight against terrorism, this book provides a broader perspective and understanding of contemporary struggles.

'…without doubt an impressive investigation figuring out not only the modern principles of terrorism but also a much-less researched area: the media involvement in this process. This cohesion makes the book full of intriguing facts and disclosures about specific details of the relationship between politics and the media in the Russian context. The author carefully investigates the past and the present of this evolution, and on this basis captures readers with a provocative conclusion that the modern Russian government is, in fact, still doing too little to stop the dispersal of extremism in the country.' Dmitry Strovsky, Ural State University, Russia 'The relation between military and security, politicians and media are in the forefront of the academic and theoretic debates. The book provides us with an exceptional comprehensive address of those matters illustrated with the vivid image of the Russian perception and practical use of the concept of the Global War on Terrorism.' Iulian Chifu, director, Conflict Prevention and Early Warning Center, Bucharest, Romania 'This is a profound and comprehensive study which deserves to be read, not only by those interested in Russian politics. International relations and global security nowadays more and more depend on media coverage of hot news whether they are local wars or terrorist acts. Bright, provocative analysis of the information warfare which is still going on.' Evgeny Pashentsev, National Economy Academy, Moscow, Russia 'Greg Simons has produced an insightful, comprehensive account of mass-media functioning and media coverage of terrorism in Russia. The book is a valuable contribution for anyone seeking to understand the battlefield of information warfare.' Daria Bazarkina, Moscow State Humanitarian University named after M. A. Sholokhov (MGGU), Russia 'Simons' book is full of intelligent comment and insight and is well worth reading to get a picture of how the media works in Russia today.' Politico 'Mass M