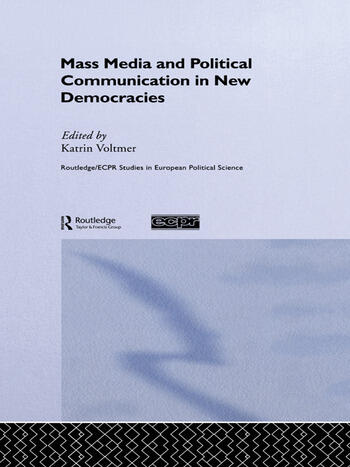 This book examines how political communication and the mass media have played a central role in the consolidation of emerging democracies around the world.

Covering a broad range of political and cultural contexts, including Eastern and Southern Europe, Latin America, Asia and Africa, this new volume investigates the problems and conflicts arising in the process of establishing an independent media and competitive politics in post-autocratic societies. Considering the changing dynamic in the relationship between political actors, the media and their audience, the authors of this volume address the following issues:

This book will be of great interest to all those studying and researching democracy and democratization, comparative politics, political communication, journalism, media and the Internet.

The mass media and the dynamics of political communication in

Processes of democratization – an introduction

Part I: The mass media and journalistic practice – normative dilemmas,

The role of the press in times of transition: the building of the

Conflicts of interest? Debating the media’s role in post-apartheid

In journalism we trust? Credibility and fragmented journalism in Latin

Old and new media, old and new politics? On- and offline reporting in

Where’s the party? Television and election campaigns in Russia

The Internet in politics: democracy in e-government in Taiwan

Politics and the media in post-communist Russia

Political Communication between democratization and the trajectories of the past.

Katrin Voltmer is Senior Lecturer of Political Communication at the Institute of Communications Studies, University of Leeds, UK.