Material Cultures, 1740–1920
The Meanings and Pleasures of Collecting 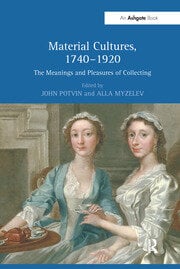 Material Cultures, 1740–1920: The Meanings and Pleasures of Collecting

Interweaving notions of identity and subjectivity, spatial contexts, materiality and meaning, this collection makes a significant contribution to debates around the status and interpretation of visual and material culture. Material Cultures, 1740-1920 has four primary theoretical and historiographic lines of inquiry. The first is how concepts of otherness and difference inform, imbricate, and impose themselves on identity and the modes of acquisition as well as the objects themselves. The second concern explores the intricacies of how objects and their subjects negotiate and represent spatial narratives. The third thread attempts to unravel the ideological underpinnings of collections of individuals which inevitably and invariably rub up against the social, the institutional, and the political. Finally, at the heart of Material Cultures, 1740-1920 is an intervention moving beyond the disciplinary ethos of material culture to argue more firmly for the aesthetic, visual, and semiotic potency inseparable from any understanding of material objects integral to the lives of their collecting subjects. The collection argues that objects are semiotic conduits or signs of meanings, pleasures, and desires that are deeply subjective; more often than not, they reveal racial, gendered, and sexual identities. As the volume demonstrates through its various case studies, material and visual cultures are not as separate as our current disciplinary ethos would lead us to believe.

John Potvin is Assistant Professor of European Art and Design History at the University of Guelph, Canada. He is the author of Material and Visual Cultures Beyond Male Bonding, 1880-1914: Bodies, Boundaries and Intimacy (2008) and editor of The Places and Spaces of Fashion, 1800-2007 (2009).

Alla Myzelev is an Assistant Professor of Art History at the University of Guelph, Canada. She has published on the relationship between Russian and Ukrainian avant-garde and craft, the role of women in the Arts and Crafts Movement as well as the representation of material culture in museums and private collections.

'John Potvin and Alla Myzelev's essay collection is informative and often intriguing in its particular approach to material culture and the role of collections and collectors - taken together it forms an erudite, well researched body of work.' Juliette MacDonald, Edinburgh College of Art, UK