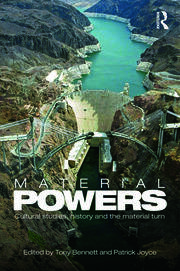 This edited collection is a major contribution to the current development of a ‘material turn’ in the social sciences and humanities.  It does so by exploring new understandings of how power is made up and exercised by examining the role of material infrastructures in the organization of state power and the role of material cultural practices in the organization of colonial forms of governance.

A diverse range of historical examples is drawn on in illustrating these concerns – from the role of territorial engineering projects in seventeenth-century France through the development of the postal system in nineteenth-century Britain to the relations between the state and road-building in contemporary Peru, for example.  The colonial contexts examined are similarly varied, ranging from the role of photographic practices in the constitution of colonial power in India and the measurement of the bodies of the colonized in French colonial practices to the part played by the relations between museums and expeditions in the organization of Australian forms of colonial rule.  These specific concerns are connected to major critical re-examination of the limits of the earlier formulations of cultural materialism and the logic of the ‘cultural turn’.

The collection brings together a group of key international scholars whose work has played a leading role in debates in and across the fields of history, visual culture studies, anthropology, geography, cultural studies, museum studies, and literary studies.

Tony Bennett is Research Professor of Social and Cultural Theory in the Centre for Cultural Research at the University of Western Sydney. He is also a Professorial Fellow in the School of Culture and Communication at the University of Melbourne and a Visiting Professor at the Open University in the UK. Recent publications include Culture: A Reformer’s Science (Sage, 1998), Pasts Beyond Memory: Evolution, Museums, Colonialism (Routledge, 2004), and Culture, Class, Distinction, with Mike Savage, Elizabeth Silva, Alan Warde, Modesto Gayo-Cal and David Wright (Routledge, 2008).

Patrick Joyce is Professor Emeritus at the University of Manchester, and currently Visiting Professor of Sociology at the London School of Economics and Fernand Braudel Fellow in History at the European University Institute, Florence. He has published widely on the history of work, class and popular politics, in recent times developing an interest in historical aspects of governmentality. His publications include Visions of the People (Cambridge University Press, 1991), The Oxford Reader on Class (Oxford University Press, 1995), The Social in Question (Routledge, 2001), and The Rule of Freedom (Verso, 2003).