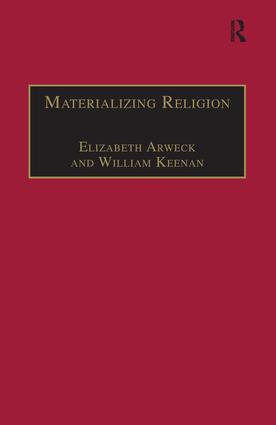 The material symbol has become central to understanding religion in late modernity. Overtly theological approaches use words to express the values and faith of a religion, but leave out the 'incarnation' of religion in the behavioural, performative, or audio-visual form. This book explores the lived experience of religion through its material expressions, demonstrating how religion and spirituality are given form and are thus far from being detached or ethereal. Cutting across cultures, senses, disciplines and faiths, the contributors register the variety in which religions and religious groups express the sacred and numinous. Including chapters on music, architecture, festivals, ritual, artifacts, dance, dress and magic, this book offers an invaluable resource to students of sociology and anthropology of religion, art, culture, history, liturgy, theories of late modern culture, and religious studies.

’… provides a wealth of information and theory to show how people create and re-create religious meaning and in turn find religious sustenance.’ Communication Research Trends ’… a fascinating study of the ways in which religious sentiment becomes inextricably imbedded in, and expressed by and through, landscape, architecture, clothing, music and dance. At its best it breaks the shackles of narrow disciplinary boundaries and conventional academic inhibitions, identifying a network of connections as to how the numinous is manifested through the material. I will continue to dip into this book, revelling in the quality of the writing and the scholarship, confident that new insights will reveal themselves.’ Culture and Religion ’In reading all the essays, one is struck by the unexpected directions from which some contributors come to topics in original and illuminating ways that throw unexpected light on larger adjacent areas in the sociology of religion.’ New Blackfriars ’… a varied collection on architecture, music, pilgrimage, dance, witchcraft, and dress… There are real strengths here…’ Sociology of Religion

Contents: Foreword; Introduction: material varieties of religious expression, William J.F. Keenan and Elisabeth Arweck; Sacred landscapes, redundant chapels and carpet warehouses: the religious heritage of South West Wales, Paul Chambers; The shape of faith or the architectural forms of the religious life, Simon Coleman and Peter Collins; Wrapped attention: revelation and concealment in non-conformism, Peter Collins and Pink Dandelion; Festivity and the sacred: the symbolic universe in the festival of the 'Fallas' of Saint Joseph (València, Spain), Xavier Costa; From the 'upper room' to the 'Christian centre': changes in the use of sacred space and artefacts in a Pentecostal assembly, Malcolm Gold; From imitation to modification and creation: religious dance in contemporary Germany, Helga Barbara Gundlach; Magical ritual in modern pagan witchcraft, Melissa Harrington; Sacre Bleu: faith, fashion and freedom: Marist foundation garments 1817-62, William J.F. Keenan; The aesthetics of Latin American Pentecostalism: the sociology of religion and the problem of taste, Bernice Martin; The sociology of religion and Handel's reception, David Martin; Tibetan religious expression and identity: transformations in exile, Eve Mullen; Materializing magical power: imagination, agency and intent in feminist witches' rituals, Kathryn Rountree; The Modern PietÃ : gendered embodiment and the religious imaginary by the side of the dying, Terhi Utriainen; Appropriation of sacredness at FÃ¡tima in Portugal, Ali Murat Yel; Index.

Elisabeth Arweck is Senior Research Fellow at the Institute of Education, University of Warwick, UK. She is Editor (with Peter Clarke) of the Journal of Contemporary Religion and has published Researching New Religious Movements: Responses and Redefinitions (2006), Theorizing Faith: The Insider/Outsider Problem in the Study of Ritual (2002) with Martin Stringer, and New Religious Movements in Western Europe: An Annotated Bibliography (1997) with Peter Clarke. William Keenan is Senior Lecturer in Sociology in the Division of Politics and Sociology at Nottingham Trent University, UK. He has published extensively on sacred dress and related aspects of symbolic culture, most recently in Theory, Culture & Society, Body & Society, British Journal of Sociology, Fashion Theory, Mortality, Religion, European Journal of Social Theory, and New International Encyclopaedia of Social and Behavioral Sciences. He edited and contributed two articles on dress studies and dress freedoms to Dressed to Impress: Looking the Part (2001), and has articles on dress, body and belief in a number of edited collections, including Undressing Religion: Commitment and Conversion from a Cross-Cultural Perspective (2000), and As Others See Us: Selected Essays in Human Communication (2004).