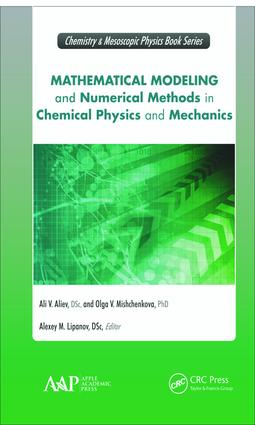 Mathematical Modeling and Numerical Methods in Chemical Physics and Mechanics

This work is the result of years of the authors’ research and experience in the fields of power and rocket engineering where they put into practice the methods of mathematical modeling shown in this valuable volume. The examples in the book are based on two approaches. The first approach involves the use of the relatively simple mathematical system MathCad. The second one involves the solving of problems using Intel Visual Fortran compiler with IMSL Libraries. The use of other software packages (Maple, MathLab, Mathematica) or compilers (С, С++, Visual Basic) for code is equally acceptable in the solution of the problems given in the book.

Intended for professors and instructors, scientific researchers, students, and industry professionals, the book will help readers to choose the most appropriate mathematical modeling method to solve engineering problems, and the authors also include methods that allow for the solving of nonmathematical problems as mathematical problems.

Mathematical Modeling as a Method of Technical Objects Research

Tabular Dependencies and Techniques of Work with Tables

Analytical Dependencies and Methods of Their Obtainment

Mathematical Models Developed with the Application of Fundamental Laws of Physics

Ali V. Aliev, DSc, is a professor at the M. T. Kalashnikov Izhevsk State Technical University in Izhevsk, Russia, where he teaches theory, calculating, and design of rocket engines as well as mathematical modeling in rocket engines. He has published over 300 articles and seven books and hold 25 patents. He has received several awards, including an Honorable Worker of High Education of the Russian Federation and Doctor Honoris Causa of Trenchin University (Slovakia). His research interests include intrachamber processes in solid propellant rocket engines and numerical simulation of processes in technical system.

Innovations in Chemical Physics and Mesoscopy