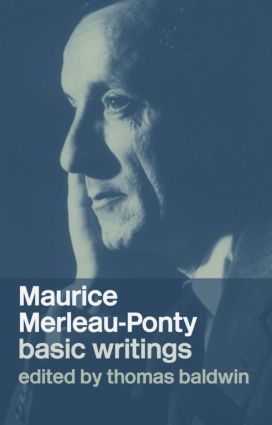 Merleau-Ponty was a pivotal figure in twentieth century French philosophy. He was responsible for bringing the phenomenological methods of the German philosophers - Husserl and Heidegger - to France and instigated a new wave of interest in this approach. His influence extended well beyond the boundaries of philosophy and can be seen in theories of politics, psychology, art and language.

This is the first volume to bring together a comprehensive selection of Merleau-Ponty's writing.

Sections from the following are included:

The Primacy of Perception

The Structure of Behaviour

The Phenomenology of Perception

The Prose of the World

The Visible and the Invisible

The Adventures of the Dialectic

In a substantial critical introduction Thomas Baldwin provides a critical discussion of the main themes of Merleau-Ponty's philosophy, connecting it to subsequent philosophical debates and setting it in the context of the ideas of Bergson, Husserl, Heidegger and Sartre. Each text is also prefaced with an explanation which sets it in its context in Merleau-Ponty's work; and there are extensive suggestions for further reading to enable students to pursue the issues raised by Merleau-Ponty. Thus the book provides the ideal materials for students studying Merleau-Ponty for the first time.