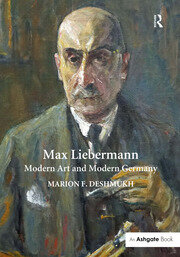 Max Liebermann: Modern Art and Modern Germany is the first English-language examination of this German impressionist painter whose long life and career spanned nine decades. Through a close reading of key paintings and by a discussion of his many cultural networks across Germany and throughout Europe, this study by Marion Deshmukh illuminates Liebermann’s importance as a pioneer of German modernism. Critics and admirers alike saw his art as representing aesthetic European modernism at its best. His subjects included dispassionate depictions of the rural Dutch countryside, his colorful garden at the Wannsee, and his many portraits of Germany’s cultural, political, and military elites. Liebermann was the largest collector of French Impressionism in Germany - and his cosmopolitan outlook and his art created strong antipathies towards both by political and cultural conservatives throughout his life.

"Marion Deshmukh has deftly interwoven a comprehensive study of Liebermann’s life, art, and critical reception within a context of the cultural and political history of Wilhelmine and Weimar Germany. Deshmukh has used Liebermann’s "bourgeois modernism" to reassess the unique and conflicted nature of modernism in Germany. Her book is now the definitive English-language source of information on the painter and will no doubt remain so for years to come." - Marsha Morton, Pratt Institute, USA

"At long last, a monograph in English on Max Liebermann, one of Germany’s most important cultural figures of the modern era. Meticulously researched, this study is especially welcome for the way in which it weaves together and illuminates Liebermann’s life, art and times in ways that enormously enrich our understanding of how culture intersected with politics in a period of fraught and conflicting ideologies." - Maria Makela, California College of the Arts, USA

"The first biography of Liebermann (1847-1935) in English, this densely written, exhaustuvely researched book is far more than a life of critically important modern German Artist. In writing about Liebermann, Deshmukh (emer., history, George Mason Univ.) looks at critical issue of German history during the first half of the 20th century... Summing Up: High recommended." - J.T. Paoletti, Wesleyan University, CHOICE Reviews

"This study succeeds in providing a useful survey of many of the existing approaches to Liebermann's work from within the German literature, including the relevance of his interest in Holland, and his position as an advocate for international Modernism in Germany. At the same time, Deshmukh provides fresh perspectives on some of these interpretations, for example in her exploration of Liebermann's art-world networks and the politicisation of his art. The result is a book of considerable value, for both English-speaking scholars of Liebermann and those less familiar with the artist's work." - Lucy Watling, The Burlington Magazine