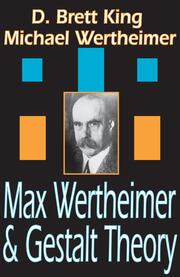 The ideas of Max Wertheimer (1880-1943), a founder of Gestalt theory, are discussed in almost all general books on the history of psychology and in most introductory textbooks on psychology. This intellectual biography of Wertheimer is the first book-length treatment of a scholar whose ideas are recognized as of central importance to fields as varied as social psychology, cognitive neuroscience, problem solving, art, and visual neuroscience.

King and Wertheimer trace the origins of Gestalt thought, demonstrating its continuing importance in fifteen chapters and several supplements to these chapters. They begin by reviewing Wertheimer's ancestry, family, childhood in central Europe, and his formal education. They elaborate on his activities during the period in which he developed the ideas that were later to become central to Gestalt psychology, documenting the formal emergence of this school of thought and tracing its development during World War I. The maturation of the Gestalt school at the University of Berlin during 1922-1929 is discussed in detail.

Wertheimer's everyday life in America during his last decade is well documented, based in part on his son's recollections. The early reception of Gestalt theory in the United States is examined, with extensive references to articles in professional journals and periodicals. Wertheimer's relationships and interaction with three prominent psychologists of the time, Edwin Boring, Clark Hull, and Alexander Luria, are discussed based on previously unpublished correspondence. The final chapters discuss Wertheimer's essays on democracy, freedom, ethics, and truth, and detail personal challenges Wertheimer faced during his last years. His major work, published after his death, is Productive Thinking. Its reception is examined, and a concluding chapter considers recent responses to Max Wertheimer and Gestalt theory.

This intellectual biography will be of interest to psychologists and readers interested in science, modern European history, and the Holocaust.