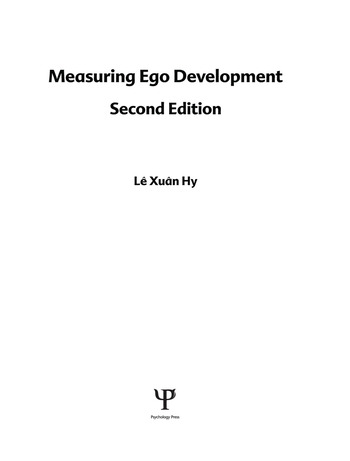 The topic of ego development developed when psychoanalysis did not fulfill all the initial hopes during its early period of prominence. Clinicians--psychiatrists, psychologists, social workers, and counselors--realized that they needed to know more than their patients' or clients' psychopathology or normalcy and their psychosexual behavior and drives.

The method for scoring sentence completions presented in this manual was originally developed for a study of women and adolescent girls. By the time it was first published in 1970, however, the method had already come into use in studies of men and boys. Since then, it has been used with widely varying samples, and the test has been translated into several other languages. This wide adoption testifies to the need for such a test. The present version of the manual incorporates three major improvements:
* it is based on data from, and is intended for use with, both males and females,
* its format is easier to use, and
* the examples cited reflect current public attitudes.

The format of the scoring manual for the Sentence Completion Test (SCT) is radically changed from the original, making it easier to find the correct rating for a response. The rating scale itself is kept simple and the basic concept of ego development is the same. A tutorial is included to assist in calculating the Total Protocol Ratings (TPRs).

ALTERNATIVE BLURB!!!
The Washington University Sentence Completion Test, which was developed by Jane Loevinger, is a free-response, semi-projective instrument for the assessment of ego development. The first manual for administering and scoring the test was published in 1970. In addition to its widespread use in the United States, it has also been adopted for use in Canada, the United Kingdom, France, Germany, Italy, the Netherlands, Japan, India, and South Africa. The WUSCT has been used for research in the fields of adolescent personality development, moral development, infancy and parenting, family and gender studies, multiculturalism, religion, psychopathology and psychotherapy, vocational studies, and social and organizational psychology. It is most frequently used by researchers and practitioners in psychology, counseling, social work, and education.

This book represents a revised edition of the WUSCT scoring manual, including all items in the 1981 forms, which were revised for use with both men and women. The content reflects current social attitudes, which have changed on some topics since the publication of the original 1970 manual. Although there have been minor changes in terminology, the conception of ego development is unchanged, and the stages of the construct are essentially the same. The format of the scoring manual, however, has been radically changed for ease of use in rating responses. (The rating scale itself, which is the same for all items, is kept simple.) A tutorial is included to assist in calculating the Total Protocol Ratings.

"...the authors present an extremely informative self-teaching manual focusing on the measurement of ego development. This is a well-written piece....this revised and updated manual for scoring the WUSCT is long overdue....The manual is self-teaching and thorough in its comprehensiveness."
—Contemporary Psychology

"This second edition of Hy and Loevinger's manual improves on the 1970 volume by including data on men as well as women, presenting an easier format of use, and offering examples that reflect more contemporary attitudes."
—Science Books and Films

"Jane Loevinger's model of ego development is one of the monumental contributions to personality and developmental psychology of the past 50 years. No other empirically-anchored approach matches Loevinger's conceptual sweep and methodological precision. Marking a major event in the study of personality development, this volume presents the long-awaited revision of the ego development scoring system."
—Dan P. McAdams
Charles Deering McCormick Professor of Psychology and Human Development, Northwe

"The completion and publication of this second edition of Measuring Ego Development is most timely and welcome. Loevinger's approach to the conceptualization and assessment of ego development has been extraordinarily successful, leading to fruitful studies from many perspectives, encompassing adolescent development, adult development, clinical populations, and explorations of the interplay between family processes and individual ego development. Based on this outstanding track record, empirical researchers, theoreticians, and clinical scholars should be delighted at the opportunity now to draw upon the newest thinking regarding one of the most meaningful and rigorous ways of measuring ego development."
—Stuart T. Hauser, MD, PhD
President, Judge Baker Children's Center, Professor of Psychiatry, Harvard Medic

"Diagnostic testers and researchers on personality and development will be delighted to see this revised and updated manual for scoring the WUSCT, the most significant contribution to instruments for personological assessment in many a year. The first edition set a new mark for clarity, ease of use, and higher psychometric standards, but the new one is better in many ways, most notably in being usable with both genders. It's a fitting crown to Jane Loevinger's distinguished career."
—Robert Holt
Professor Emeritus, New York University