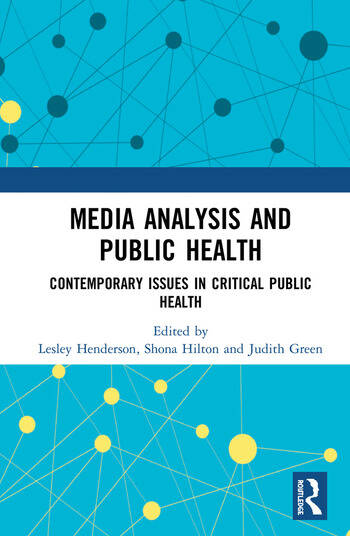 This volume showcases new approaches to studying public health in traditional and emerging media, suggesting that we need more analyses that focus on the production of media and on power dynamics, as well as studies of audience reception of media messages.

The collection asks a variety of questions about the role of media in analysing public health. Contributors ask: who is influential in producing the stories we see in the press and on social media? Who benefits, and who is damaged, by media debates on health topics? They investigate the role of big business in seeking to shape public opinion and consumption in print and online media; how issues such as hand washing come to be framed over time by newspapers; how conflicts over immunisations get covered; how health promotion messages do their work; and the positive role of online media in helping foster drug safety. Together, they reach the conclusion that since mass media is a crucial element of civic society, more in-depth understanding of how it works and what impacts it has on public health is essential.

Given the crucial role of the media in shaping health debates, pushing certain issues up the policy agenda, defining problems for audiences and presenting potential solutions, this book’s analysis will be of interest to all those studying how the media shape policy, as well as public health researchers with an interest in mass communication. This book was originally published as a special issue of Critical Public Health.

Introduction – The media and public health: where next for critical analysis?

1. How the food, beverage and alcohol industries presented the Public Health Responsibility Deal in UK print and online media reports

2. Public engagement and the role of the media in post-marketing drug safety: the case of Eltroxin® (levothyroxine) in New Zealand

4. ‘To drink or not to drink’: media framing of evidence and debate about alcohol consumption in pregnancy

7. ‘I cannot explain it. I knew it was wrong’: a public account of cigarette smoking in pregnancy

8. Perception and translation of numbers: the case of a health campaign in Denmark

9. Newspaper coverage of childhood immunisation in Australia: a lens into conflicts within public health

10. Is social isolation a public health issue? A media analysis in Aotearoa/New Zealand

Lesley Henderson is a Sociologist and Senior Lecturer in Social and Political Sciences at Brunel University, UK. Her expertise is in communications and social change, and she has published widely on media and public health, science and environmental communication.

is Deputy Director of the MRC/CSO Social and Public Health Sciences Unit and co-leads a research programme on public health policy at the University of Glasgow, UK. Her research focuses on macro level determinants of public health and the framing of policy debates through scientific, political and media channels.

is Professor of Sociology in the School of Population and Environmental Sciences at King’s College London, UK, where she co-directs the Social Science and Public Health Institute.