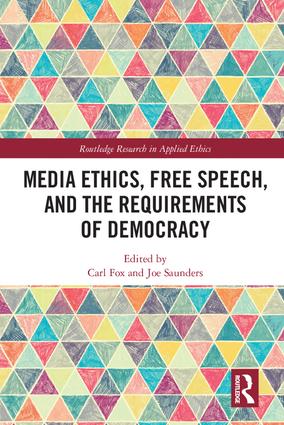 Media Ethics, Free Speech, and the Requirements of Democracy

How we understand, protect, and discharge our rights and responsibilities as citizens in a democratic society committed to the principle of political equality is intimately connected to the standards and behaviour of our media in general, and our news media in particular. However, the media does not just stand between the citizenry and their leaders, or indeed between citizens and each other. The media is often the site where individuals attempt to realise some of the most fundamental democratic liberties, including the right to free speech.

Media Ethics, Free Speech, and the Requirements of Democracy

explores the conflict between the rights that people exercise in, and through, the modern media and the responsibilities that accrue on account of its awesome and increasing power. The individual chapters—written by leading scholars from the US, UK, and Australia—address several recent events and controversial developments in the media, including Brexit, the rise of Trump, Lynton Crosby, Charlie Hebdo, dog-whistle politics, fake news, and political correctness. This much-needed philosophical treatment is a welcome addition to the recent literature in media ethics. It will be of interest to scholars across political and social philosophy, applied ethics, media and communication studies, and political science who are interested in the important issues surrounding the media and free speech and democracy.

"This is an excellent book filled with original and thought-provoking arguments. As any good book in applied ethics, it should appeal to a broad audience as well as to professional philosophers. Scholars and advanced students in other related fields, as well as practitioners of journalism will find this book rewarding and accessible." – Notre Dame Philosophical Reviews

Part I: Democracy and the Media

1. Immigration in the Brexit Campaign: Protean Dogwhistles and Political Manipulation

2. The Ethics of Interrogation

3. Lynton Crosby and the Dark Arts of Democracy

9. The Real Story about Fake News

11. "I’m not with stupid": Tales of False Consciousness for a Post-Brexit Age

12. Partisan News, the Myth of Objectivity, and the Standards of Responsible Journalism

13. The Obligation to Diversify One’s Sources: Against Epistemic Partisanship in the Consumption of News Media

Carl Fox is a lecturer at the IDEA Centre in the University of Leeds. He won the 2014 Robert Papazian Essay Prize for his paper on ‘Political Authority, Practical Identity, and Binding Citizens’. He has also worked as a sub-editor on the Irish Independent, Sunday Independent, and Evening Herald.

is an Assistant Professor in Philosophy at Durham University. Funnily enough, he won the 2015 Robert Papazian Essay Prize for his paper ‘Kant and the Problem of Recognition’. He currently works on freedom, love, media ethics, Kant and the post-Kantian tradition.