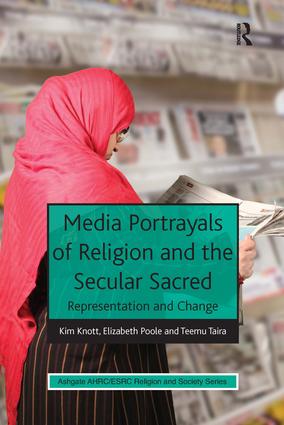 Media Portrayals of Religion and the Secular Sacred

Is it true that Christianity is being marginalised by the secular media, at the expense of Islam? Are the mass media Islamophobic? Is atheism on the rise in media coverage? Media Portrayals of Religion and the Secular Sacred explores such questions and argues that television and newspapers remain key sources of popular information about religion. They are particularly significant at a time when religious participation in Europe is declining yet the public visibility and influence of religions seems to be increasing. Based on analysis of mainstream media, the book is set in the context of wider debates about the sociology of religion and media representation. The authors draw on research conducted in the 1980s and 2008-10 to examine British media coverage and representation of religion and contemporary secular values, and to consider what has changed in the last 25 years. Exploring the portrayal of Christianity and public life, Islam and religious diversity, atheism and secularism, and popular beliefs and practices, several media events are also examined in detail: the Papal visit to the UK in 2010 and the ban of the controversial Dutch MP, Geert Wilders, in 2009. Religion is shown to be deeply embedded in the language and images of the press and television, and present in all types of coverage from news and documentaries to entertainment, sports reporting and advertising. A final chapter engages with global debates about religion and media.

’… surveys with intelligence the changing media landscape in relation to religion…’ Church Times ’For us researchers in the Nordic Region, the dimensions of this programme are the stuff of dreams. It’s time to make more space on the bookshelf!’ Olav Hovdelien, Notater Om Religion Og Samfunn What the authors show - tellingly, and with great skill - is that there is a new story emerging. Religion is being reclaimed in the secular sphere and in public life. It is being wrestled out of the hands of religious leaders, and debated, commented upon and refracted in new ways that appeal to the wider public. Modern Believing 'Recommended.' Choice 'Portrayals of Religion and the Secular Sacred, which examines the British media, is therefore a useful and welcome addition to the few such studies in Britain.' Communication Research Trends ’Media Portrayals is well presented account of some carefully conducted research. Readers may especially enjoy the chapter on media representations of Christianity in public life, which exposes the biases and agendas of the media outlets studied…a stimulating read for those interested in how religious beliefs of all sorts are represented within the media.’ Anvil

Kim Knott is Professor of Religious and Secular Studies at Lancaster University. She has published five academic books, including The Location of Religion: A Spatial Analysis and Diasporas: Concepts, Intersections, Identities, and a popular book and website, Moving People, Changing Places. Elizabeth Poole is Senior Lecturer in Media and Communications at Keele University. She is the author of Reporting Islam: Media Representations of British Islam and co-editor of Muslims and the News Media. Teemu Taira is Research Fellow in Comparative Religion at the University of Turku, Finland. He has published articles (in English and Finnish) on religion, discourse and culture, including on the Finnish and British media.

This book series emanates from the largest research programme on religion in Europe today - the AHRC/ESRC Religion and Society Programme which has invested in over seventy-five research projects. Thirty-two separate disciplines are represented looking at religion across the world, many with a contemporary and some with an historical focus. This international, multi-disciplinary and interdisciplinary book series includes monographs, paperback textbooks and edited research collections drawn from this leading research programme.