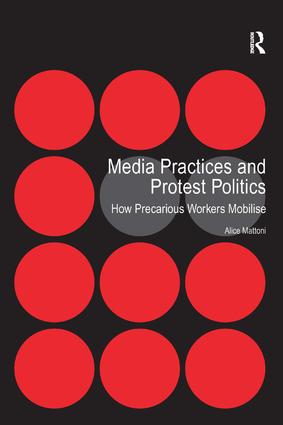 How do precarious workers employed in call-centres, universities, the fashion industry and many other labour markets organise, struggle and communicate to become recognised, influential political subjects? "Media Practices and Protest Politics; How Precarious Workers Mobilise" reveals the process by which individuals at the margins of the labour market and excluded from the welfare state communicate and struggle outside the realm of institutional politics to gain recognition in the political sphere. In this important and thought provoking work Alice Mattoni suggests an all-encompassing approach to understanding grassroots political communication in contemporary societies. Using original examples from precarious workers mobilizations in Italy she explores a range of activist media practices and compares different categories of media technologies, organizations and outlets from the printed press to web application and from mainstream to alternative media. Explaining how activists perceive and understand the media environment in which they are embedded the book discusses how they must interact with a diverse range of media professionals and technologies and considers how mainstream, radical left-wing and alternative media represent protests. Media Practices and Protest Politics offers important insights for understanding mechanisms and patterns of visibility in struggles for recognition and redistribution in post-democratic societies and provides a valuable contribution to the field of political communication and social movement studies.

'A vital question today is how the range of political actors can be expanded. New political movements must take action within an unequal media environment. Alice Mattoni's tightly argued new book on Italy's movement against precarity is one of the most important on alternative media practice to be published in recent years. Its contribution to our understanding of contemporary struggles for visibility is fundamental.' Nick Couldry, Goldsmiths, University of London UK 'A fresh look at the complex relationships among activists and media. In this insightful study of collective organizing among precarious workers in Italy, Mattoni provides a useful framework for understanding the media practices of social movement actors. Highly recommended for both scholars and activists.' Kathleen Blee, University of Pittsburgh, USA 'The decline of trade union power from its high-water mark in the 60s and 70s has numerous causes. In the UK, legislation outlawing sympathy strikes and secondary picketing, as well as requiring membership ballots for strike action to be legal has had a huge impact. However, more broadly and in many countries in the developed world, social and work patterns have changed in a manner that seemed to challenge the way labour had traditionally organised. This is why Alice Mattoni’s new book, focused on the political mobilisation of precarious workers in Italy, is a timely and important intervention… Mattoni’s account is highly prescient today, and might get even more so in the future.' LSE Review of Books '… the strength of Media Practices and Protest Politics is that it is well-grounded in media theory and its development of the media knowledge practices and relational media practices concepts … this book and the concepts it introduces are very timely. Social movement scholars are increasÂ­ingly drawing attention to the critical role of the web and Internet activism and this book provides a much-needed framework for such a task.' Social Forces

Alice Mattoni is at the University of Pittsburgh, USA. Her research interests include social movements, new labour movements, political communication, and qualitative methods.