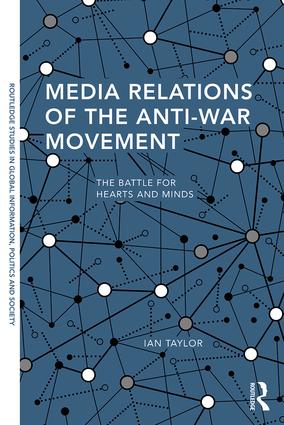 Media Relations of the Anti-War Movement

The Battle for Hearts and Minds, 1st Edition

In this book, Ian Taylor examines how a social movement, the anti-Iraq War movement in the UK, engaged with the media as a part of their campaigning against the invasion and occupation of Iraq. Moving beyond content analysis to draw upon interviews with locally based journalists and activists, Taylor examines how locally based anti-war groups engaged with their local press, as well as how those groups were reported on by the local press in their respective areas. In the process of exploring these ideas, the book takes on questions like:

Media Relations of the Anti-War Movement makes a unique contribution to research on the interactions between social movements and the media and plugs a major gap in the literature on the Iraq War and the media.

'The media activities of progressive movements and the work of local and alternative newspapers have been too often ignored by the academy. Here Ian Taylor throws the spotlight on the peace movement’s relations with the local and alternative press over the Iraq invasion of 2003. It is highly original, richly theorised, massively researched, tightly argued – and crucial reading for media academics and students.' - Richard Lance Keeble, Professor of Journalism, University of Lincoln, UK

'Work on news media and war was has largely been concentrated at a national level, involving elite actors and national media outlets, so Ian Taylor’s work makes a rare and significant contribution in offering a keenly-theorised, ground-level analysis based on local anti-war groups and their relations with local media in Britain - areas whose operations and significance cannot merely be extrapolated from research or theory on a national scale. Taylor uses evidence from content analysis and interviews to argue that pressure from popular social movements matters, and to provide a critique of the media relations of the British Stop the War Coalition and of ‘challenger’ sources more generally, so this is an important book for students of social movements, of media and war and of the role of local media.' - Peter Goddard, University of Liverpool, UK

'Anti-war movements since 9/11 and the initiation of the ‘war on terror’ have faced tremendous obstacles in their efforts to achieve political influence. In this ground breaking work, Taylor offers a nuanced and fascinating analysis of UK anti-war groups and their relationship to local media with respect to the 2003 invasion of Iraq and subsequent occupation. Documenting both the strengths and the weaknesses of these grass roots groups, it is essential reading for all those seeking to understand the potential of anti-war movements to influence public debate and the barriers that need to be overcome.' - Piers Robinson, Chair in Politics, Society and Political Journalism, Department of Journalism Studies, University of Sheffield, UK

'This is a theoretically rich study with original and fascinating empirical work on traditionally neglected areas: local news and the media strategies of grassroots activism. This is a deeply valuable contribution at a time in which local journalism faces a diverse set of challenges and activists vie for the attention of wider publics in politically unsettling times.' – Katy Parry, European Journal of Communication

Part I: The Scope of this Study

Chapter 2: Frame Analysis, the ‘Dual Role’ of the Media, and Source-Media relations

Chapter 5: The socio-political composition of the anti-war movement in Britain

Chapter 7: Matters of professionalism and legitimacy:

The role of the newsworkers

Chapter 8: Local news reporting and commentary on the anti-war movement

Appendix 1: Itemisation of different groups and media in the UK anti-war movement

International communication encompasses everything from one-to-one cross-cultural interactions to the global reach of the internet. The Routledge Studies in Global Information, Politics and Society celebrates – and embraces – this depth and breadth. To completely understand communication, it must be studied in concert with many factors, since, most often, it is the foundational principle on which other subjects rest. This series provides a publishing space for scholarship in the expansive, yet intersecting, categories of communication and information processes and other disciplines.

Routledge Studies in Global Information, Politics and Society would like to publish work that educates readers about the complexities of international communication. We are especially interested in three areas: 1) research that focuses on empirical support for theoretical and conceptual development in communication and information processes, 2) research that is historically grounded and temporally expansive, and 3) research that is comparative and explores the world in both geopolitical and non-geopolitical categories. We welcome individual and co-authored manuscripts, as well as edited volumes.