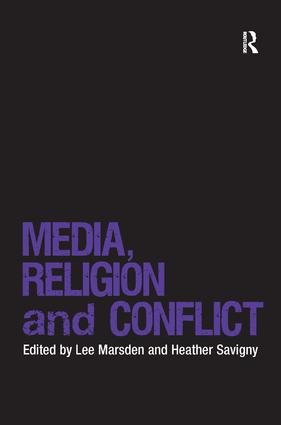 International relations as a discipline has largely ignored the role of religion in shaping international events. The growth of Islamist militancy, the increasing influence of the Christian Right on US foreign policy and George Bush's war on terror changed this for good. Now more than ever we need to analyze this change and consider how religion and the way it is represented affects international politics. Lee Marsden and Heather Savigny uniquely bring together some of the leading figures in the fields of politics and media, international relations and security, and international relations and religion, including freelance journalist and newspaper columnist Nick Cohen, the international authority on politics and religion Professor Jeffrey Haynes, and Professor Justin Lewis who has a number of BBC commissions under his belt. The volume offers a series of case studies reflecting on how the media covers religion as conflict within and between states. It challenges readers to critically examine how media reportage and commentary influences perceptions and responses to religion and security.

'The dynamic and complex relationship between the media, religion and conflict have arguably never been more central to contemporary political scholarship. This timely volume provides a fascinating and incisive window into some of the most important issues surrounding this critical subject. Packed full of empirically rigorous and theoretically sophisticated analyses, it will be essential reading for scholars and the public at large.' Richard Jackson, Aberystwyth University, UK 'Timely and important, this book brings together an impressive collection of essays. The critical assessments of the role that the media plays in transmitting and interpreting religious ideas as sources of conflict, makes this essential reading for all students of contemporary society'. Mick Temple, Staffordshire University, UK 'Media Religion and Conflcit is one of the first constructive, unbiased analyses of its kind which looks at the role of media, religion and conflict in current domestic and global politics. It forces the reader to re-evaluate media constructs, cultural perceptions and issues surrounding identity whilst examining how and why conflict occurs as a result of these self-same media stereotypes. Whilst the media is empowered to wield such enormous influence by providing only partial information, misrepresentation and effectively generating conflict by playing on people's fears, there is little hope that the 'war on terror' will ever be resolved.' M/C Reviews 'Successfully draws together many of the issues dealt with in a wide and varied selection of studies….very careful analysis…The great strength of this unusual volume lies in the care devoted to detailed analysis…a strong and well-written polemical statement…' The Round Table

In the twenty-first century religion has become an increasingly important factor in international relations and international security. Religion is seen by policy makers and academics as being a major contributor in conflict and its successful resolution. The role of the Ashgate series in Religion and International Security is to provide such policy makers, practitioners, researchers and students with a first port of call in seeking to find the latest and most comprehensive research on religion and security. The series provides established and emerging authors with an opportunity to publish in a series with a reputation for high quality and cutting edge research in this field. The series produces analytical and scholarly works from around the world that demonstrate the relevance of religion in security and international relations. The intention is not to be prescriptive or reductionist in restricting the types of books that would be appropriate for the series and as such encourages a variety of theoretical and empirical approaches. International security is broadly defined to incorporate inter and intra-state conflict, human security, terrorism, genocide, religious freedom, human rights, environmental security, the arms trade, securitisation, gender security, peace keeping, conflict resolution and humanitarian intervention. The distinguishing feature is the religious element in any security or conflict issue.