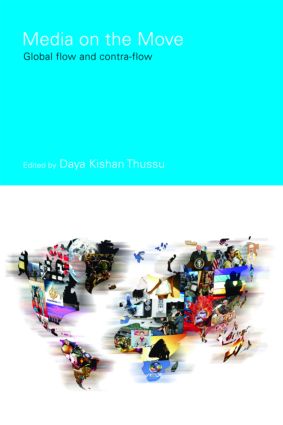 Media on the Move

Media on the Move provides a critical analysis of the dynamics of the international flow of images and ideas. This comes at a time when the political, economic and technological contexts within which media organisations operate are becoming increasingly global.

The surge in transnational traffic in media products has primarily benefited the major corporations such as Disney, AOL, Time Warner and News Corporation. However, as this book argues, new networks have emerged which buck this trend: Brazilian TV is watched in China, Indian films have a huge following in the Arab world and Al Jazeera has become a household name in the West.

Combining a theoretical perspective on contra-flow of media with grounded case studies into one up-to-date and accessible volume, Media on the Move provides a much-needed guide to the globalization of media, going beyond the standard Anglo-American view of this evolving phenomenon.

An 'exemplary collection…the breadth of the offerings is a salutary reminder of how much escapes our attention, no matter how gustatory our reading of the field…As a primer for graduate students and academics, this book is exemplary. It would work perfectly as a text for undergraduate courses in international or global media.' John Jirik, University of Texas, Austin

Part I: Contextualising Contra-Flow 1. Mapping Global Flow and Contra-Flow 2. Diasporas and Contra-Flows Beyond National Centricism 3. Thinking Through Contra-flows: Perspectives from Post-colonial and Transnational Cultural Studies Part II: The Non-Western Media in Motion 4. Contra-Flow or the Cultural Logic of Uneven Globalization: Japanese Media in the Global Agora 5. Bollywood and the Frictions of Global Mobility 6. Brazil and the Globalization of Telenovelas 7. Challenger or Lackey? The Politics of News on al-Jazeera Part III: Regional Perspectives on Flow and Contra-Flow 8. The Rising Korean ‘Wave’: Korean Media Go Global 9. South Africa as a Regional Media Power 10. Flows and Contra-Flows in Transitional Societies 11. Facing the Challenge of Global Competition: Chinese News in Transition Part IV: Moving Media - From the Margins to the Mainstream? 12. Alternative Re-Framing of Mainstream Media Frames 13. Transnational Feminism and the Revolutionary Association of the Women of Afghanistan 14. The Islamic Internet: Authority, Authenticity and Reform