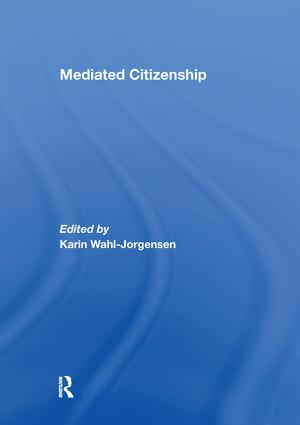 Previously published as a special issue of Social Semiotics, this book grapples with such questions as: What does it mean to be a citizen in contemporary societies? What role do mass media play in the making of citizenship?

Drawing on ground-breaking work from scholars around the world known for their contributions to the study of media and politics, this volume covers a range of practices of mediated citizenship, with chapters studying the mourning after the deaths of Pim Fortuyn and Theo van Gogh in the Netherlands and notions of authenticity in letters written to British Conservative politician Boris Johnson. The authors explore discourses of nationalism in the English and Scottish Press, and examine struggles over definitions of the public in Australian public service broadcasting and the US Medicare debate. Emerging possibilities for mediated citizenship are assessed in three studies of online activism and participation in the US and China. The book builds on conventional understandings of citizenship and the public sphere, calling attention to the need for understanding affective attachments to politics. Finally, it demonstrates that we cannot fully understand citizenship without looking at the concrete workings of power in and through mediated discourse.

Karin Wahl-Jorgensen is Senior Lecturer in the Cardiff School of Journalism, Media and Cultural Studies. Her work on the relationship between citizenship, democracy and the media has appeared in more than 20 international journals. She is the author of Journalists and the public (Hampton Press, 2006) and Citizens or consumers? (Open University Press, 2005; with Justin Lewis and Sanna Inthorn).