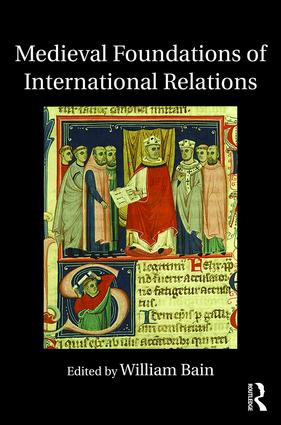 Medieval and modern are certainly different; however, this collection of essays proceeds from the conviction that the modern world was not built on a new plot with new building materials. Instead, it was constructed out of the rubble, that is, the raw materials, of the Middle Ages.This will be of great interest to students and scholars of IR, IR theory and political theory.

"Medieval foundations of International Relations stood out for me - perhaps counterintuitively for a book that has 'medieval' in its title - for how relevant it seems to understanding the changes in international relations we are facing today. Contributors look at questions such as the extension of international society, just war theory and humanitarian intervention."

Krisztina Csortea is the Book Reviews Editor for International Affairs

"… not only medievalists and International Relations scholars but those from a range of humanities and social science disciplines will engage with this volume. Not only does it display an impressive intellectual range – political theory, metaphysics, jurisprudence, theology – but it also showcases expansive research that forces the reader to tackle new subjects of interest as well as rethink approaches to subjects they thought they knew."

"….all chapters explicitly strive to address core IR concerns and do so without falling short of disciplinary standards. This not only contributes to the effectiveness of the overall IR argument but also, as Canning notes in his chapter, sets an example of how productive this type of dialogue can be for all involved. In sum, this volume is essential for all scholars interested in historical and contemporary international relations alike."

2. The Medieval and the International: A Strange Case of Mutual Neglect

3. Metaphysics and the Problem of International Order

5. Between False-Universalism and Radical-Particularism: Thoughts on Thomas Hobbes and International Relations

6. The Medieval Roman and Canon Law Origins of International Law

7. Then and Now: The Medieval Conception of Just War Versus Recent Portrayals of the Just War Idea

8. Humanitarian Intervention in a World of Sovereign States: The Grotian Dilemma

9. The Medieval and Early Modern Legacy of Rights: The Rights to Punish and to Property