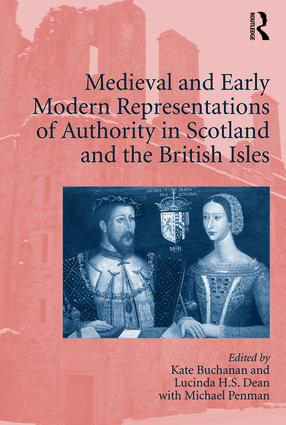 What use is it to be given authority over men and lands if others do not know about it? Furthermore, what use is that authority if those who know about it do not respect it or recognise its jurisdiction? And what strategies and 'language' -written and spoken, visual and auditory, material, cultural and political - did those in authority throughout the medieval and early modern era use to project and make known their power? These questions have been crucial since regulations for governance entered society and are found at the core of this volume. In order to address these issues from an historical perspective, this collection of essays considers representations of authority made by a cross-section of society within the British Isles. Arranged in thematic sections, the 14 essays in the collection bridge the divide between medieval and early modern to build up understanding of the developments and continuities that can be followed across the centuries in question.

Whether crown or noble, government or church, burgh or merchant; all desired power and influence, but their means of representing authority were very different. These essays encompass a myriad of methods demonstrating power and disseminating the image of authority, including: material culture, art, literature, architecture and landscapes, saintly cults, speeches and propaganda, martial posturing and strategic alliances, music, liturgy and ceremonial display. Thus, this interdisciplinary collection illuminates the variable forms in which authority was presented by key individuals and institutions in Scotland and the British Isles. By placing these within the context of the European powers with whom they interacted, this volume also underlines the unique relationships developed between the people and those who exercised authority over them.

Contents: Representations of authority: an introduction, Katherine Buchanan and Lucinda Dean. Part I Using and Reusing Internal and External Spaces: Keeping up appearances: the English royal court on military campaigns to Scotland, 1296-1336, David Simpkin; Monastic gatehouses and regality jurisdictions: the gatehouse as representation of secular authority in Scottish monasteries, Richard Oram; Wheels and creels: the physical representation of right to fishing and milling in 16th century Angus, Scotland, Kate Buchanan; A contested space: demonstrative action and the politics of transitional authority in Glasgow 1650-1653, Kirsteen M MacKenzie. Part II Pious Rituals and Military Display: Who is this King of Glory? Robert I of Scotland (1306-1329), Holy Week and the consecration of St Andrews Cathedral, Michael Penman; Edward III and the art of authority: military triumph and the decoration of St Stephen's Chapel, Westminster 1330-1364, James Hillson; Scottish and British? The Scottish authorities, Richard III and the cult of St Ninian in late medieval Scotland and northern England, Tom Turpie; Part III Representing Female Power and Noble Authority: In the absence of an adult monarch: ceremonial representations of authority by Marie de Guise, 1543-1558, Lucinda Dean; The representations and ambiguities of the warlike female kingship of Elizabeth I of England, Estelle Paranque; Feasting and fighting? Projections of authority amongst the 17th-century Highland elite, Allan Kennedy. Part IV Privileged Poetry, Music and Material Culture: The last kings of Ireland: material expressions of Gaelic lordship c.1300-1400 A.D., Elizabeth Fitzpatrick; ‘Out of My Contree’: visions of royal authority in the courts of James I and James II, 1424-1460, Kylie Murray; James IV, St Michael and the armed man, Jamie Reid-Baxter; ‘By hammer in hand all arts do stand’: the protection and projection of craft privilege in the early-modern Scottish burgh, Stephen Bowman; Index.

Katherine (Kate) Buchanan is an early career researcher of medieval castle landscapes and spatial analysis. Her PhD was received in 2014 from the University of Stirling. Kate is currently working on a number of projects from medieval castles to eighteenth and nineteenth century reading history focusing on historical spatial relationships. Lucinda (Lucy) H.S. Dean is an early career researcher of ceremony and ritual focusing on medieval and early modern Scotland. She received her PhD from the University of Stirling in 2013 and is working on a monograph on Scottish royal ceremonies of death and succession to add to a number of book chapters and journal articles on a variety of related themes. Michael Penman is a senior lecturer at the University of Stirling who has published widely on the political, cultural and religious history of thirteenth and fourteenth century Scotland. His most recent major publication, Robert the Bruce, King of the Scots, was published by Yale University Press in 2014.