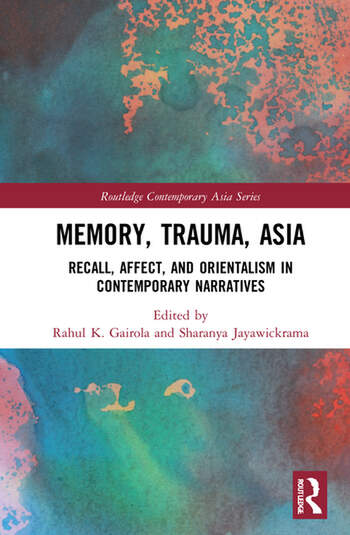 Contemporary Asia is a diverse and sweeping region throughout which residual legacies of colonialism persist as military regimes and dictatorships have produced untold human suffering. Countless losses of life have been caused by disease, revolution, civil war, and genocide from the distant past into the twenty-first century. A global pandemic, natural catastrophes, closed borders, and acute xenophobia render existing social and political tensions even more volatile today. As such, two critical imperatives of Memory, Trauma, Asia are to re-think established insights of memory and trauma theory and to enrich trauma studies with diverse Asian texts for critically analyzing literary and cultural representations of Asia and its global diasporas. This volume broadens the scope of memory and trauma studies by prompting and dialogically meditating on the following questions:

Is memory always a reliable register of the past? Is trauma a concept that translates across cultures? Can pain and affect have global applicability and utility for literary and cultural analysis? Do the approaches and perspectives generated by literary and cultural texts hold purchase for social, political, and historical interventions in the 21st century? How are trauma studies and postcolonial studies related in the ways in which Asians are subjected to orientalist lenses that warrant foreclosure of empathy and humanity? How do inter-ethnic racism, inter-Asian classism, queerphobia, sexism, misogynoir, and systemic xenophobia continue to impact Asian people and culture?

By critically meditating on whether existing concepts of memory and trauma are sustainable in relation to the histories, present states, and futures of the non-Occidental world, this volume unites perspectives on both dominant and marginalized sites in the broader Asian continent. Contributors explore the complex and surprising intersections of literature, history, ethics, affect, and social justice across the region through its wide-ranging but closely comparative focus on geo-political sites across East, South, and Southeast Asia, and on Asian diasporas in Australia and the USA. This volume is thus the first of its kind to comparatively argue for an intersectional methodology of memory and trauma studies that centers the Orient in contrast to the Occident. It will appeal to scholars, students, teachers, and readers interested in memory and trauma studies, comparative Asian studies, diaspora and postcolonial studies, global studies, and women, gender, and sexuality studies in the 21st century.

Part I: Activating Memory as Personal Testimony
2. The Language of Trauma in Selected Short Stories by Gao Xingjian (Michael Ka-chi Cheuk)
3. Exorcising the Yellow Perils Within: Internment Trauma and Memory in Joy Kogawa’s Obasan and John Okada’s No No Boy (Kerry S. Kumabe)
4. Healing from the Khmer Rouge Genocide by “telling the world”: Active Subjectivity and Collective Memory in Loung Ung’s First They Killed My Father (Nelly Mok)
5. Forgiving But Not Forgetting in The Garden of Evening Mists (Zhu Ying)

Sharanya Jayawickrama, PhD (University of Cambridge, UK) was Assistant Professor in the Department of English Language and Literature at Hong Kong Shue Yan University, Hong Kong. She was previously Postdoctoral Fellow at the University of Macau and Lecturer in Literatures in English at the University of the West Indies, Jamaica. She was moreover an adjunct lecturer at the National University of Ireland, Galway, and King’s College, University of London, UK. Her published essays include field-shaping examinations of race, gender, and sexuality in Sri Lankan literature and culture. She passed away in September 2019.