Memory and Memorials
The Commemorative Century 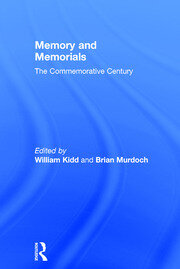 Memory and Memorials: The Commemorative Century

The twentieth century, perhaps more than any other, was shaped by war and conflict. In particular, the two world wars have had a profound influence on the development of world history, especially in western Europe. The aim of Memory and Memorials, however, is not to seek the effects war has had on the twentieth century, but rather to explore how societies chose to remember wars and manipulate this memory for political and cultural purposes. Tackling issues of actual memory, distorted memory and reconstructions of the past, the use and nature of the war memorial, and the reflection of all these points in selected art, literature and film, the main theme of Memory and Memorials is to stress both continuity and change in memory and memorial.

Contents: Introduction, William Kidd and Brian Murdoch; Part 1 Memorials and remembrance, 1915-30: Rodin's Bourgeois de Calais: commemorating a French national ideal in London, Axel Lapp; Making the Great War great:1914-18 war memorials in Wallonia, Laurence van Ypersèle; Belonging to a 'grandiose' family: visual memory and representations of the chain of solidarity between the generations in French First World War culture, Marie-Monique Huss; The Scottish National War Memorial, Angus Calder; Ordeal and re-affirmation: masculinity and the construction of Scottish and English national identity in Great War memorial sculpture 1919-30, J.A. Black; Memory and prophecy among the war-graves: Hans Chlumberg's drama, Miracle at Verdun, Brian Murdoch. Part 2 Remembering and forgetting, from the Second World war to the present: 'To the lads who came back': memorial windows and Rolls of Honour in Scotland, William Kidd; War, family, commemoration: a path to history, J.-S. Sériot; Remembering and embroidering in Jean Rouaud's family cycle, Geoff Woollen; Communal myth and silenced memories: the unremembered experience of Italians in Scotland during the Second World War, Wendy Ugolini; Liberating France without the French: grammars of representation, Hilary Footitt; The victims of the purges in Liberation France: between memory, oblivion and catharsis, FranÃ§ois Rouquet. Part 3 Collective memory in question: challenge and reconstruction?: Memory, distortion and the war in German popular culture: the case of Konsalik, Maggie Sargeant; The problematic commemoration of war in the early films of Alan Resnais, Alastair Duncan; Pierre Drieu la Rochelle, Louis Malle and the ambiguous memory of French fascism, Hugo Frey; Occupation Memories: French history and the Aubrac Affair in the 1990s, Hanna Diamond and Claire Gorrara; Transmission of memory in the classroom: France and the Algerian war in the 1990s, Jo McCormack; From 'hereditary enmity' to Franco-German entente: shared m