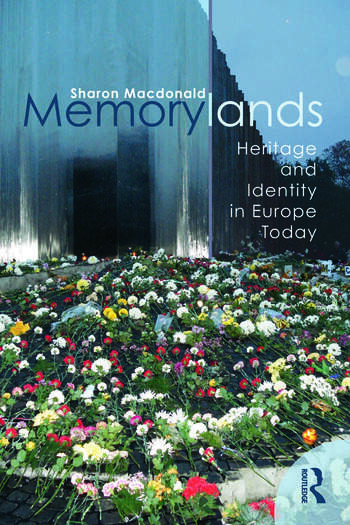 Memorylands is an original and fascinating investigation of the nature of heritage, memory and understandings of the past in Europe today. It looks at how Europe has become a ’memoryland’ – littered with material reminders of the past, such as museums, heritage sites and memorials; and at how this ‘memory phenomenon’ is related to the changing nature of identities – especially European, national and cosmopolitan. In doing so, it provides new insights into how memory and the past are being performed and reconfigured in Europe – and with what effects.

Drawing especially, though not exclusively, on cases, concepts and arguments from social and cultural anthropology, Memorylands argues for a deeper and more nuanced understanding of the cultural assumptions involved in relating to the past. It theorizes the various ways in which ‘materializations’ of identity work and relates these to different forms of identification within Europe. The book also addresses questions of methodology, including discussion of historical, ethnographic, interdisciplinary and innovative methods. Through a wide-range of case-studies from across Europe, Sharon Macdonald argues that Europe is home to a much greater range of ways of making the past present than is usually realized – and a greater range of forms of ‘historical consciousness’. At the same time, however, she seeks to highlight what she calls ‘the European memory complex’ – a repertoire of prevalent patterns in forms of recollection and ‘past presencing’.

The examples in Memorylands are drawn from both the margins and metropolitan centres, from the relatively small-scale and local, the national and the avant-garde. The book looks at pasts that are potentially identity-disrupting – or ‘difficult’ – as well as those that affirm identities or offer possibilities for transcending national identities or articulating more cosmopolitan futures. Topics covered include authenticity, temporalities, embodiment, commodification, nostalgia and Ostalgie, the musealization of everyday and folk-life, Holocaust commemoration and tourism, narratives of war, the heritage of Islam, transnationalism, and the future of the past.

Memorylands is engagingly written and accessible to general readers as well as offering a new synthesis for advanced researchers in memory and heritage studies. It is essential reading for those interested in identities, memory, material culture, Europe, tourism and heritage.

Acknowledgments  Prologue  1. The European Memory Complex: An Introduction  2. Making Histories: Europe, Tradition and Other Present Pasts  3. Telling the Past: The Multitemporal Challenge  4. Feeling the Past: Materiality, Embodiment and Place  5. Selling the Past: Commodification, Authenticity and Heritage  6. Musealization: Everyday Life, Temporality and Old Things  7. Transcultural Heritage: Reconfiguring Identities and the Public Sphere  8. Cosmopolitan Memory: Holocaust Commemoration and National Identity  9. The Future of Memory - and Forgetting  References

Sharon Macdonald is Anniversary Professor of Cultural Anthropology at the University of York, UK and Visiting Professor in the Institute of European Ethnology, Humboldt University, Berlin. Her authored books include Difficult Heritage (Routledge, 2008) and Reimagining Culture, and, as editor, The Politics of Display (Routledge, 1997) and The Companion to Museum Studies (Choice Outstanding Academic Title, 2007).

"Memorylands offers a detailed mapping of the complex and varied ways in which memory, heritage and history interact to make the past present within Europe. Macdonald argues that this has profound implications for what she calls European cosmopolitan conviviality. Drawing on ethnographic research across a number of European countries, the book demonstrates why memory and heritage matter in terms of contemporary cultural policy, politics and cultural production. Macdonald draws on her own extensive research, supplemented by a wide-ranging synthesis of ethnographic writing, to make a decisive anthropological intervention into ongoing debates in memory and heritage studies." - Laurajane Smith, The Australian National University

"With an impressively light touch and a no less impressively wide-ranging grasp of complex arguments, Sharon Macdonald has given us a coherent, convincing, and historically deep account of what heritage has been and where it may be going. Through her concept of ‘past presencing’, she successfully traces and illustrates its socio-cultural trajectories through sometimes wildly differing terrains of memory, nostalgia, and conservation. Her examination of the European contexts in which so much of the interest in heritage has emerged, moreover, is uncompromisingly anthropological, allowing her to offer an enlightening reversal of the Eurocentrism with which the topic has hitherto so often been approached." - Michael Herzfeld, Harvard University.