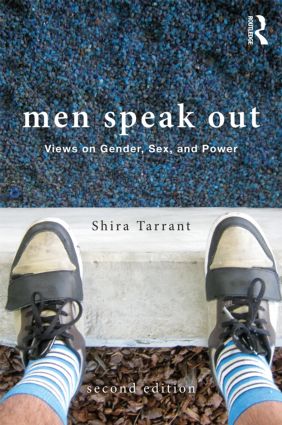 Featuring eleven new essays and six revised thematic sections, this second edition of a favorite anthology continues to encourage robust discussion and vibrant debate about masculinity and the possibilities for progressive change. The contemporary, compelling essays in Men Speak Out appeal to students, scholars, activists, and everyday readers.

I didn’t think you could write a great book better but Tarrant has done it! This edition is brilliant. The voices gathered here are honest and tender, smart and incisive, and best of all, they come from all corners of our communities. These men are not only disrupting myths across communities they’re also reminding us that what we have to gain from interrogating masculinity is nothing short of a social revolution.

Men Speak Out should be on the bookshelves of feminist educators and activists everywhere. No other collection sheds such powerful light on the lived experiences of men as they work to understand and challenge patriarchy. The essays are poignant, provocative, and, importantly, demonstrate how men from various walks of life are confronting sexism, homophobia, and ideas about what it means to be a man.

This is a riveting and timely compilation of essay contributions that collectively capture the profundity of the budding 21st century "man." A meticulous roadmap that helps to explore the evolving definition of "maleness" in a gender imbalanced society while weaving the many intersectional facets of masculinity, which include feminism, sexuality, race, class, criminality, religion, culture, politics, power, machismo, and much more."

"This book is an essential read for male and female feminists alike. Through compelling personal narratives men speak out about power, inequality, sexism, homophobia, race, and class. Their moving essays remind us why gender equality is important for both men and women. Even more importantly, the essays in this volume suggest ways that we might start to challenge and rethink damaging and restrictive notions of masculinity and femininity. I look forward to using it in my Contested Masculinities class."

Many of my male students are hungry to hear critical perspectives on and alternatives to dominant/dominating masculinity. Through the bold honesty of a diverse range of voices, this book offers new and inspiring counter-narratives of what it means to be a man.

"In the 1970s, the question ‘can men be feminists?’ led to lively debates. Today, this is no longer the question. The multi-generational men's chorus of feminist voices in Men Speak Out demonstrates unequivocally that, today, some men are doing feminist work on many fronts—as teachers, writers, musicians, students, anti-violence activists, fathers, lovers, and friends. This is an important book to read—and to savor, discuss, and share with our sons and daughters."

--Michael A. Messner, Professor of Sociology and Gender Studies, University of Southern California

"Until I read this book, I did not realize the stunning absence of men speaking about their feelings. At times, I felt like a self-absorbed spouse, yanked out of my own preoccupations long enough to REALLY HEAR what my man experiences in this society. This is an important validation for men trapped in the masculine construct, for women who wonder about men's role in the feminist movement, and for all the trannies and queers who negotiate these issues."–

--Inga Muscio, author of Cunt: A Declaration of Independence

"I have always believed that feminism is about gender itself more than women; with its diverse array of insightful voices, Men Speak Out is an important addition to the growing body of work exploring men's crucial role in the fight for gender justice."

This book simultaneously explores two often disjointed perspectives: deep reflection about what it personally means to be a man and the changing but pervasive social problem of sexism. It is therefore a great way to get students thinking about these gendered tensions between self and society.

makes a significant contribution to the study of contemporary masculinities. Its value lies both in its analytical breadth and in the diversity of voices and points of view it brings together. This is an absolutely wonderful text for a class on masculinities, as well as a fascinating and thought-provoking read for a wider public

Though we give much lip service to technology, by far the largest social change of the last fifty years has been in gender roles. Men Speak Out gives voice to the underheard, and understudied, male side of that story with an astonishing breadth of experiences. Even better, it does so in a complex, thoughtful, timely, uniquely pop-culture-attuned, and occasionally humorous way. An extremely useful resource for anyone seeking to understand masculinity in America today.

—Jean M. Twenge, Ph.D., author of Generation Me and co-author of The Narcissism Epidemic

Men Speak Out is a comprehensive theory-driven textbook on masculinity that students will actually want to read. Students will love the first-person easy-to-read accounts from ordinary men who provide refreshingly honest self-interrogations of masculine privilege, complicity, identity, and relationships. It is a great addition to any gender course.

is great. The essays capture the expectations, complexities, and paradoxes that shape contemporary masculinity. I’ll use this book in upper-level courses on Gender and Violence as well as in my introductory classes, filled with students who’ve never recognized masculinity as something they can analyze and change.

is an ideal text for both introductory courses in gender studies and more advanced courses in men’s studies and masculinity. The book highlights the persistence of hegemonic masculinity while challenging the notion of a monolithic "men’s experience" through first-hand accounts of the ways in which masculinity is shaped by race, sexuality, class, religion, geography, and violence. Extremely readable and accessible.

—Astrid Henry, author of Not My Mother’s Sister: Generational Conflict and Third-Wave Feminism

The second edition of Men Speak Out does a brilliant job of challenging dominant messages about masculinity that are "restrictive to men and oppressive to all." With this compelling and nuanced anthology’s emphasis on both problems and solutions, it provides a much-needed framework for all levels of gender studies courses.

Part I: Masculinity and Identity

2 The Enemy Within: On Becoming a Straight White Guy, Jacob Anderson-Minshall

5 Stepping Out of Bounds, Nathan Einschlag

6 Grooming Masculinity: Cleans Your Balls, Yes But What Else Does It Do?, Michael J. Murphy

Part II: The Politics of Sex and Love

12 Darker Shades of Queer: Race and Sexuality at the Margins, C. Winter Han

16 An Abused State of Mind, Anonymous

20 Breaking the Silence One Mile at a Time, Grantlin Schafer

23 Exposed in Iraq: Sexual Harassment and Hidden Rank Structure of the US Army, Marshall Thompson

26 A Tribute to My Father, Chris Dixon

31 Why I Am Not a Feminist, Haji Shearer

33 From Oppressor to Activist: Reflections of a Feminist Journey, Amit Taneja

34 Abandoning the Barricades: or How I Became a Feminist, Michael S. Kimmel

39 Good Ol’ Boy: A Tale of Transformation in the Rural South, Jay Poole

41 How Can I Be Sexist? I’m an Anarchist!, Chris Crass

Shira Tarrant is an associate professor in the department of women’s studies at California State University, Long Beach. Her earlier successful book When Sex Became Gender was published by Routledge in 2006.