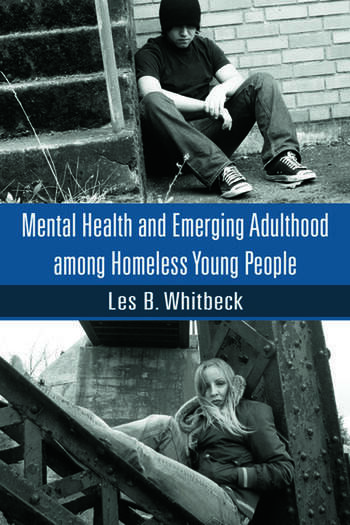 What happens to homeless and runaway adolescents when they become adults? This is the first study that follows homeless youth into young adulthood and reviews the mental health consequences of runaway episodes and street life. The adolescents were interviewed every three months for three years from their mid teens to their early twenties. The study documents the psychological consequences associated with becoming adults when missing the critical developmental tasks of adolescence. The authors report high levels of psychological problems associated with victimization prior to and after running away. These victimization experiences shape the behaviors of these young people, affecting their relationships with others and their chances of conventional adjustment. Across time, the more successful their adaptation to street life and the street economy, the more barriers to conventional adult life emerge.

The distress, including self-mutilation and suicidal behaviors, among this population is examined, as well as the impact street life has on future relationships, education, and employment. Nutritional and health problems are also explored, along with the social and economic impact of this population on society. As such, the book provides insight about why the current prevention and treatment programs are failing in an effort to help policy makers modify approaches to adolescent runaways.

Intended as a supplementary text for undergraduate and/or graduate courses on homelessness, high risk youth, social deviance, adolescence and/or emerging adulthood taught in departments of psychology, human development, sociology, social work, and public health, this compelling book will also appeal to anyone who works with homeless adolescents.

Les B. Whitbeck is the John G. Bruhn Professor of Sociology at the University of Nebraska - Lincoln. He has authored and co-authored more than 100 refereed journal articles. This is Dr. Whitbeck's second book on adolescent homelessness.

"Based on three monthly interviews over three years, the book expertly charts the psychological developments of its subjects and the experiences which shaped their behaviour. It shows, too, how their gradual habituation to street life creates a barrier to conventional adult life." – Young Minds Magazine

"A ground-breaking longitudinal study... students would find it fascinating... it would be adopted in sociology, social work, and psychology courses at the graduate and undergraduate level. It would also be valuable to researchers, agency workers and policy experts... an important part of any scholar's knowledge on adolescence and emerging adulthood." – Jeffrey Jensen Arnett, Clark University, USA

"The results are compelling, and, at times, very surprising...The data ... underscores ... the extent of mental health and substance abuse problems among homeless and runaway adolescents [and] the ... long-term consequences... It is ... likely to become a text for courses on the homeless...It should be of much interest to researchers ... human service workers, mental health providers, law enforcement, juvenile justice personnel, policy makers and legislators." – Luis A. Vargas, University of New Mexico School of Medicine, UK

"The design of the study ... is simply unique...I am deeply impressed with the breadth of coverage ...This title may be used... at both the (upper) undergraduate and graduate level ...in courses on sociology, social work, and psychology." – Luc Goossens, Catholic University of Leuven, Belgium