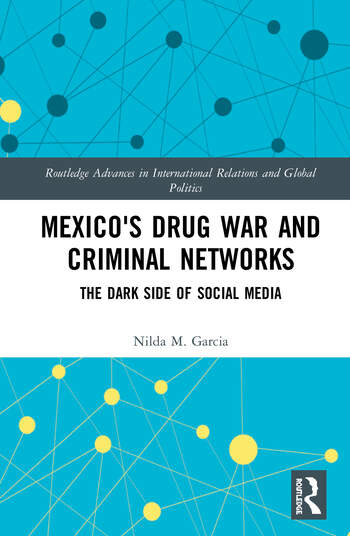 Mexico's Drug War and Criminal Networks: The Dark Side of Social Media

Mexico's Drug War and Criminal Networks examines the effects of technology on three criminal organizations: the Sinaloa cartel, the Zetas, and the Caballeros Templarios.

Using social network analysis, and analyzing the use of web platforms Facebook, Twitter, and YouTube, Nilda M. Garcia provides fresh insights on the organizational network, the central nodes, and the channels through which information flows in these three criminal organizations. In doing so, she demonstrates that some drug cartels in Mexico have adopted the usage of social media into their strategies, often pursuing different tactics in the search for new ways to dominate. She finds that the strategic adaptation of social media platforms has different effects on criminal organization’s survivability. When used effectively, coupled with the adoption of decentralized structures, these platforms do increase a criminal organization’s survival capacity. Nonetheless, if used haphazardly, it can have the opposite effect.

Drawing on the fields of criminology, social network analysis, international relations, and organizational theory and featuring a wealth of information about the drug cartels themselves, Mexico's Drug War and Criminal Networks will be a great source for all those interested in the presence, behavior, purposes, and strategies of drug cartels in their forays into social media platforms in Mexico and beyond.

2. Social Media: The Continuation of War by Other Means

"Nilda Garcia has masterfully assessed the role social media has played in the Mexican drug war and demonstrated how social network analysis of drug network social media can be utilized to understand their strategies and survival capacity. This book addresses how cartel social media operations can both harm and strengthen Mexican drug networks. It will be of value to scholars of the drug war and law enforcement analysts." — Nathan Jones, Assistant Professor of Security Studies, Sam Houston State University

"In Mexico in the 21st century, social media have provided violent drug cartels the means to launch public relations campaigns, to facilitate the recruitment of new, younger members, and to send threats to their gang rivals, to government officials, and to civil society leaders and organizations that resist them. Dr. Garcia’s insightful new book provides a masterful examination of the ways that use of social media outlets have enabled Mexico’s major criminal drug trafficking organziations to survive and thrive amidst the country’s deepening drug violence and brutality. It is a must read for anyone interested in understanding Mexico’s dark drug underworld." — Bruce M. Bagley, Professor, Dept. of International Studies, University of Miami

"In this illuminating account, Nilda Garcia takes us to the darkest side of the dark side of social media. Amidst a surge of books trying to make sense of the surge of drug violence in Mexico and elsewhere, Nilda Garcia's account stands out for showing us how traffickers are not only battling it out on the streets but also online, violently competing not only over territorial space but also in the information wars in cyberspace." —

"Mexico’s Drug War and Criminal Networks is the first systematic attempt to study a "dark side of social media" focused on the Mexican cartels. Through a keen and methodologically rigorous analysis, Nilda Garcia masterfully shows how three Mexican transnational criminal organizations—the Sinaloa Cartel, Los Zetas and the Knights Templar—interact in the cyberspace, organize among themselves, and which strategies they use to conquer and survive during a seemingly endless drug war." — Guadalupe Correa-Cabrera, Ph.D., Associate Professor, Schar School of Policy and Government, George Mason University