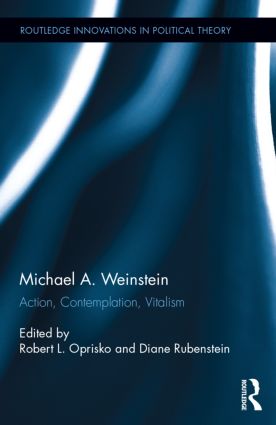 This book is a major reassessment of Michael Weinstein’s political philosophy. It situates his singular contribution, designated as "critical vitalism," in the context of both canonical American and contemporary continental theory. Weinstein is presented as a philosopher of life and as an American Nietzsche. Yet the contributors also persuasively argue for this form of thinking as a prescient prophecy addressing contemporary society’s concern over the management of life as well as the technological changes that both threaten and sustain intimacy. This is the first full scale study of Weinstein’s work which reveals surprising aspects of a philosophic journey that has encompassed most of the major American (pragmatic or vitalist) or Continental (phenomenological or existential) traditions. Weinstein is read as a comparative political theorist, a precursor to post-structuralism, and as a post-colonial border theorist. A different aspect of his oeuvre is highlighted in each of the book’s three sections. The opening essays comprising the "Action" diptych contrasts meditative versus extrapolative approaches; "Contemplation" stages a series of encounters between Weinstein and his philosophic interlocutors; "Vitalism" presents Weinstein as a teacher, media analyst, musician, and performance artist. The book contains an epilogue written by Weinstein in response to the contributors.

"For those of us—and we are many—who have had the great fortune to know Michael Weinstein as a mentor, a teacher, a confident, a fellow provocateur, a passionate thought-wanderer, a colleague, a cultural bricoleur, a lover of philosophical texts, and a friend, this volume is at once touching, enthralling, thought-provoking, energizing, and a deeply pleasurable read. For everyone with a genuine passion for American political, aesthetic, visual, and digital thought, Oprisko and Rubenstein’s text exposes one to the mind/life/persona(s) of one of the most admirable thinkers of the last fifty years; it invites everyone to ride along with Weinstein’s unique and compelling philosophy of critical vitalism."—François Debrix, Professor of Political Science and Director of the ASPECT program, Virginia Tech

4. This Flesh Belongs to Me: Michael Weinstein and Max Stirner Justin Mueller

5. Weinstein's American Philosophy: Intimacy and the Construction of Self Jonathan McKenzie

8. "I am the Radical Reality": Weinstein's "Defensive Life" as a Political Response to Post-Civilization Julie Webber

10. I am the God of My Own Tribe: Weinstein and Islam Joseph Kaminski

is Professor of Government and American Studies at Cornell University. Her teaching and research focuses on contemporary continental theory- semiotics, deconstruction, psychoanalysis, post-structuralism, Western Marxism- as well as the manifestations of theory in current Franco-American politics and ideology.